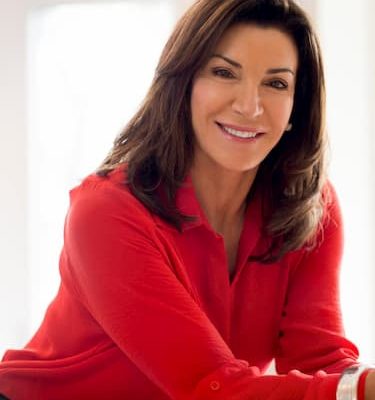 Hilary Farr is a British-Canadian designer, reality television personality and a former actress. She serves as a co-host of HGTV ‘Love It or List It’ alongside David Visentin and ‘Tough Love with Hilary Farr.’

How Tall Is Hilary Farr

She graduated from Ryerson University in Toronto, with a major in Interior Design.

Farr has not revealed much about her family but she has said her love for design was impacted by her mother who was working as an antique trader for Liberties of London, which often involved visiting old houses and mansions from the Victorian era. At the age of 16, her mother asked her to design the interior of a house they bought on the outskirts of London.

Hillary was married to Gordon Farr, a producer and writer. The couple got married on September 12, 1982 but they divorced in 2008.

She has a son known as Josh from her marriage to her ex-husband. There is little public information available about Josh. He is however married and has three children; two boys and a girl. In May 2020, Hilary posted a video on her Twitter feed of her son and grandkids wishing her a Mother’s Day.

A video from my son Josh and grandkids that I wanted to share. Happy Mother’s Day! pic.twitter.com/xppySH4WHZ

Farr has a Pomeranian-Chihuahua mix known as Mimi. She normally features her on her Instagram page and she joins her on trips to the salon, Love It Or List It set.

Queen Mimi ? has no time for these shenanigans… ?

Farr made her acting debut in 1972 in a small role in Layout for 5 Models. She later appeared on Sex Farm, a controversial movie that tackled the topics of sex and infidelity and was considered to be taboo by most film critics. It even had to be renamed to “Frustrated Wives” because of promotion issues.

Over the years she appeared in “Never Mind the Quality, Feel the Width”, “Legend of the Werewolf”, “City on Fire”, “We Got It Made”, and “The Rocky Horror Picture Show”.

Hilary is a co-host of HGTV ‘Love It or List It’ alongside David Visentin. In the show, Hilary as a designer convinces the homeowners to renovate the house while David as a realtor convinces them to sell their home.

The show is shot in Toronto and n surrounding areas in Ontario, Canada. They also shot a couple of episodes in North Carolina and there’s a spin-off show, Love It or List it Too, which is shot in Vancouver.

David and I will be doing battle again on a new @_loveitorlistit at 9PM ET on @hgtv!

In 2016 Hillary said the show is not scripted but the same year a couple who appeared on the show sued the show and claimed the show was not only fake but that they also ruined their home with “cheap” renovations.

“The show is scripted, with roles and reactions assigned to the various performers and participants, including the homeowners. These characters are actors or television personalities playing a role for the camera, and in this case, none of them played more than a casual role in the actual renovation process.”

The lawsuit was filed against big Coat TV – the Canadian-based company that produces the show, and Aaron Fitz Construction, a North Carolina contractor hired to do the renovations.

The lawsuit alleged that “the couple contends that not only were they victims of shoddy work, they also suffered from a breach of contract, unfair trade practices in violation of North Carolina’s general contractor laws and a “bizarre” business model that creates an “inherent conflict of interest” for a production company that makes most of its money on TV advertising.”

Hilary is not married to David. They are just co-hosts. She is currently divorced while David is married to Canadian real estate agent Krista Grycko Visentin.

Hilary premiered a new show ‘Tough Love with Hilary Farr’ on HGTV on December 20, 2021. In the show she is challenged by families whose dysfunctional houses are putting a strain on their relationships. She uses her creative design solutions with a dash of tough love to renovate their spaces and get these families back on track.

Hillary was diagnosed with breast cancer in 2012. She revealed the news for the first time during an interview with PEOPLE. She said she had gone for a routine mammogram when the doctors found a suspicious lump. She immediately underwent surgery, and lab results confirmed that the tumor was precancerous, not malignant.

In late 2014, a mammogram revealed she had invasive breast cancer, a tumor that had spread into surrounding breast tissue. She underwent a second lumpectomy. Nearly two months later, she was shocked to learn she was supposed to get radiation as a part of her course of treatment but was incorrectly told by the medical oncologist it was not necessary.

“I was terrified, because I knew I had a very small window. I felt absolute fury that someone could be so flippantly wrong. “I could have been dead.”

She filed a complaint to the facility and the oncologist retired the next year.

In March 2015, she began a 28-day course of radiation, but 7 months later, doctors found another suspicious breast growth. She underwent a third lumpectomy, and the tumor was considered precancerous. Farr is now in remission.

She said she is sharing her story with the hopes of helping others. “Fear of breast cancer stops a lot of women from getting checked. But as terrifying as it is, you face it. Thinking that you should keep it a secret or just power through doesn’t help and it doesn’t heal. If I can change that for one person, then that’s enough.”