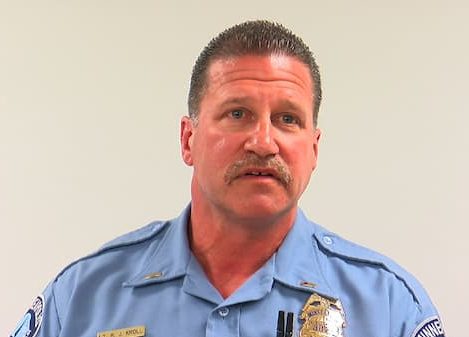 Lieutenant Bob Kroll is the president of the Police Officers Federation of Minneapolis. He has come under fire for his letter referring to George Floyd as a “violent criminal”, describing those protesting over his death as terrorists and criticizing the city’s political leadership for not authorizing greater use of force to stop the rioting.

He is married to Liz Collins who is an anchor and reporter for WCCO since 2008. Kroll however doesn’t like talking about his marriage. According to Star Tribune, he refused to discuss his marriage during an interview “going as far as saying he’d no longer talk to the Star Tribune if it reported they were married. He said he was concerned it would negatively affect her career.”

Bob is the president of the Police Officers Federation of Minneapolis since 2015. He has been with the police department since 1989. During his career, he has held numerous positions including with the vice squad, SWAT, and as the domestic assault unit commander. In 1996 he was elected as a director of the federation board.

He has come under scrutiny in lawsuits over accusations of brutality and has been the focus of several internal probes, one of which led to his demotion.

According to a racial discrimination lawsuit filed by a group of black officers, he was overheard calling U.S. Rep. Keith Ellison, a DFLer who is Muslim and black, a terrorist. He denied making the comment, but then-Chief Tim Dolan issued a public apology to Ellison and called Kroll’s comments unacceptable.

He endorsed Donald Trump and spoke at a Trump rally in Minneapolis on October 10, 2019. He won a t-shirt, with the words “Cops for Trump” on the front, which was a form of protest. According to CBS Minnesota at the time the police union sold the shirts after the city banned law enforcement officers from wearing uniforms while endorsing political candidates.

He addressed the crowd before the president and blasted the Obama administration for what he referred to as “oppression” of police officers. “The Obama administration and the handcuffing and oppression of police was despicable. The first thing President Trump did when he took office was turn that around. He decided to start letting cops do their job, put the handcuffs on the criminals instead of us.”

While Donald Trump took the stage he brought Kroll on stage to thank him. He said that he had first seen “the great gentleman on television, pouring out his heart, pouring out his guts” while standing up to the city’s liberal establishment.

“From an outside perspective, he’s definitely got some potential political momentum, depending on if he decided to exercise that but it also cuts the other way because in Minneapolis the constituency is definitely not pro-Trump.”

In May 2020 after the death of George Floyd Bob wrote a letter to the union members calling George Floyd a “violent criminal”, describing those protesting over his death as terrorists and criticizing the city’s political leadership for not authorizing greater use of force to stop the rioting. He also defended the four officers involved in Floyd’s death.

“What is not being told is the violent criminal history of George Floyd. The media will not air this. I’ve worked with the four defense attorneys that are representing each of our four terminated individuals under criminal investigation, in addition with our labor attorneys to fight for their jobs. They were terminated without due process.”

He said that “heroic” police officers have been let down by political leaders who failed to authorise the deployment of sufficient numbers of officers on the streets to shut down the protests, and the destruction and looting.

“What has been very evident throughout this process is you have lacked support from the top … Given the right numbers, the right equipment and your ability to use them would have ended this Tuesday night. I’ve noted in press conferences from our mayor, our governor, and beyond, how they refuse to acknowledge the work of the MPD (Minneapolis police department) and continually shift blame to it. It is despicable behavior. How our command staff can tolerate it and live with themselves I do not know.”

He also praised the city’s police officers; “No one with the exception of us is willing to recognize and acknowledge the extreme bravery you have displayed through this riot. You have my utmost respect.”

Police union President Lt. Bob Kroll, commending officers and blasting the protests in a letter to his membership: pic.twitter.com/nZO8tryeqa

Janeé Harteau, former Minneapolis police chief condemned Kroll in a tweet and suggested that he should resign.

A disgrace to the badge! This is the battle that myself and others have been fighting against. Bob Kroll turn in your badge! pic.twitter.com/SQmeNIIU3v

In his letter, Bob referred to George Floyd as a “violent criminal”.

“What is not being told is the violent criminal history of George Floyd. The media will not air this. I’ve worked with the four defense attorneys that are representing each of our four terminated individuals under criminal investigation, in addition with our labor attorneys to fight for their jobs. They were terminated without due process.”

He was maybe referencing Floyd arrest in 2007 in Houston, Texas, for an armed robbery at a woman’s home. He was sentenced to five years behind bars in 2009 as part of a plea agreement. George had however moved as part of turning his life around.