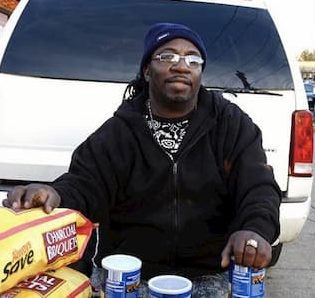 David McAtee was a Louisville African-American chef and the owner of Yaya’s BBQ, who was shot dead at 12:15 a.m on June 1, 2020 when the Kentucky National Guard and the Louisville Metro Police Department (LMPD) shot into a crowd that had formed outside of Dino’s Food Mart.

He was 53 years old at the time of his death.

David was the son of Odessa Riley. After his death, she said he was a community pillar and that he didn’t hurt anybody.

“He left a great legend behind. He was a good person. Everybody around him would say that. My son didn’t hurt nobody. He didn’t do nothing to nobody.”

She said that when a mother loses a child, “a piece of you goes along with that child.”

“It’s alright to lose a mother or father. You get hurt by that, too. But when a mother loses her child, a piece of you goes along with that child. Why? Because you carry that child for nine long months.”

“Right now, I can’t tell you the feeling I have. All I can say — when a mother loses her child, a piece of you goes along with that child.” — Odessa Riley, #DavidMcAtee‘s mother #Louisville #BreonnaTaylor pic.twitter.com/jdtI4mqcZL

David owned Yaya’s BBQ near the Dino’s Food Mart parking lot, one of the most popular corners of Louisville’s West End area. During an interview with West of Ninth in February, he said he had been doing his job for about 30 years.

“I’ve been doing this for about 30 years, but I’ve been here for two. This location is one of the busiest locations in west Louisville. I always wanted to be in this spot, and when the opportunity came, I took it.”

He added that he hoped to one day buy the lot at 26th Street and Broadway and build a restaurant.

David James, Louisville Metro Council President said that McAtee always knew what was going on iun the neighborhood and the city and always offered free food to those in need and others.

McAtee was shot and killed early Monday morning during an incident between the Louisville Metro Police Department, Kentucky National Guard and a crowd at Dino’s Food Mart in the Russell neighborhood. According to WHAS11, a witness said he was an innocent bystander during the incident and was trying to save his niece from being hit in the crossfire when shots rang out.

Louisville had issued a 9 p.m. set curfew for the entire city following protests against the deaths of unarmed Black people. However, protests continued to grow well into the night — particularly in the city where Breonna Taylor was shot and killed by police after they entered her home on a botched warrant.

LMPD Chief Steve Conrad said that police and guards received word that a “large group” had congregated in the Dino’s parking lot — which is next door to McAtee’s BBQ restaurant.

Kentucky Gov. Andy Beshear said in a Monday statement that the LMPD and the National Guard were “fired upon” and, as a result, “returned fire, resulting in a death.”

David died on June 1, 2020 after he was shot by the police. After his death LMPD Chief Steve Conrad was promptly fired after it was revealed that no body camera video existed of the incident.