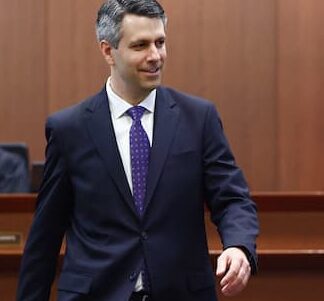 J. Benjamin Rottenborn is an American attorney and Principal at Woods Rogers PLC. He practices in the Litigation, Government Investigations & White Collar Criminal Defense, and Emerging Growth practice groups at Woods Rogers. He previously served as an adjunct professor at the University of Virginia School of Law.

He graduated with highest distinction from the University of Virginia and earned his law degree at Stanford Law School where he served as president of the Stanford Law and Policy Review.

She has also worked as a legal clerk for the Honorable Mary M. Schroeder, Chief Judge of the Ninth Circuit Court of Appeals.

Ben and his wife shared two children together; a son and a daughter. Their names are not in the public domain.

Rottenorn is a litigator and principal at Woods Rogers PLC where she practices in the Litigation, Government Investigations & White Collar Criminal Defense, and Emerging Growth.

He has experience in representing clients in complex civil litigation matters involving issues in fiduciary duty, general commercial law, private equity/venture capital, securities, intellectual property, and products liability. He practices at at both the trial and appellate levels in federal and state courts around the country.

He previously worked as a partner in the Chicago office of international law firm Kirkland & Ellis LLP. His career highlights include representing venture capital directors in a breach of fiduciary duty lawsuit brought by former shareholders in a technology start-up company. He also defended a Fortune 50 company in a suit seeking specific performance of a $15 billion merger contract.

He began his legal career as a judicial clerk for the Honorable David G. Campbell, U.S. District Judge for the District of Arizona.

According to his profile some of the cases he has represented includes;

Benjamin is one of the attorney’s representing Amber Heard who is being sued for $50 million by his ex-husband Johnny Depp over a 2018 op-ed she wrote for The Washington Post in which she described herself as a “public figure representing domestic abuse.”

The couple met in 2009 and got married in 2015 but divorced in 2016 with accusation of acts of physical violence but they have both denied the other’s claim.

On April 21, 2022 Benjamin cross examined Johnny Depp about drugs, texts, and addiction in an attempt to challenge his defamation lawsuit against Heard.

He referred to a series of 2013 text exchanges between Depp and his friend, actor Paul Bettany, to allege that the actor assaulted Heard while under the influence.

On April 26, 2022 during the Johnny Depp vs. Amber Heard defamation trial, Ben who is representing Amber objected to his own question.

Ben was cross examing Depp’s House Manager, Ben King about the time Depp severed his fingertip. Ben asked King a question but Depp’s lawyer shot it down with an objection.

Rottenborn then tried to rephrase the question: “You didn’t know what could cause damage to Mr. Depp’s hand while you were there on March 8, correct?” he asked.

King replied; “Dr. Kipper told me he’d sustained an injury on one of his fingers —”