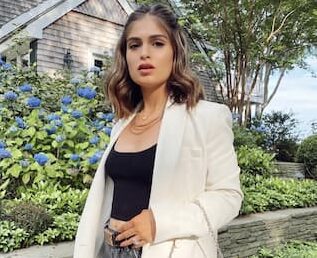 Batsheva Haart is the daughter of Julia Haart. She is a social media influencer and appears alongside her family on Netflix’s reality show ‘My Unorthodox Life’.

She attended Center for Kosher Culinary Arts, graduating in 2011 with a Culinary Arts Diploma. She later joined Capri School of Hair Design where she studied hair styling and design. In 2012 she earned her New York State Cosmetology License. She also has an associate’s degree in Accessories Design from the Fashion Institute of Technology.

“That was definitely a hard transition. You know, I had been brought up in a way where I was taught one thing and then my mom decided she didn’t believe in it anymore. So I kind of had to decide for myself what I believed in and what my values were, which I’m so grateful for that experience, because I felt like I had the ability to choose. I’m very proud to be Jewish Orthodox, but I definitely have a different appreciation for everybody and whatever level of being religious they are.”

She is the daughter of Yosef Hendler and Julia Haart. Her parents divorced and her mother has since been remarried to Silvio Scaglia, an Italian businessman.

Bat’s mother, Julia Haart is a fashion designer and entrepreneur. She is the Chief Executive Officer and co-owner of Elite World Group. She previously lived in an ultra-Orthodox Jewish community and sold insurance on the side while caring for her children. After she left the community she created a shoe line named after her, partnering with ski boot engineers and using insulation gel designed for NASA space stations to formulate an ultra-comfortable high heel. Her innovative designs caught the eye of La Perla, where she was then brought on as the brand’s creative director.

Batsheva has three siblings: Miriam Haart, Shlomo Haart and Aron Haart. Miriam is a co-founder of Norma, Queer Chart, co-teacher in CS11, CoLab Fellow of IDEO, and co-founder of Eazitt. She graduated from Stanford University with a B.S. degree in Computer Science.

Shlomo attended the University of Cambridge where she completed an international summer program in Sociology and Genetics. He graduated with a B.A. degree in Political Science and Government.

Bat is married to Binyamin “Ben” Weinstein. The couple got married when Bat was 19 years old. The couple fell in love while they were mere teenagers and had to pursue their parents to let them get married in order to establish a proper relationship as at the time they were still in the orthodox civilization which required them to be in matrimony to date and get physical. Days after they got married Julia Haart left the community.

The couple eventually followed suit and relocated and slowly began to blend the aspects of modern life into religion. They’re still Jewish and follow the rules, but they do not abide by a few particular constraints per se, and that is where some of their issues lie.

A post shared by My Unorthodox Life- Batsheva (@batshevahaart)

On November 18, 2021, Batsheva announced that she was separating from her husband of 9 years. She said there was no ‘secrets or salacious events to blame’ as they had grown in their own way for over the past 9 years they have been together.

“After time and consideration we have made the decision to separate. We have so much love and respect for each other but have realized that it is time to take some space to ensure that each of us live the most joyous, fulfilling lives possible.

There are no secrets nor salacious events to blame. We are just two best friends who met at a very young age and have grown over the past 9 years each in our own way. We so appreciate your continuous support as we embark upon this new chapter of our lives, separately.”

Bat worked at Etc. Steakhouse as a Sous Chef for three months. After becoming a hairstylist she worked at Femme Coiffure. She also worked in Roma Industries LLC as a design intern for five months. She also worked as a product stylist intern at THE NET-A-PORTER GROUP.

She also briefly worked for NFL as a visual system competition and later went to work for LA Perla, her mother’s company as a design intern. After two months she became a social media freelancer.

She is a TikTok content creator. She revealed in an interview that she discovered TikTok after attending a Teen Vogue summit in LA. She said she was inspired after she heard Lizzo’s song ‘Truth Hurts’ had gone to the top 10 charts after it was sampled on the app. In November 2019 she created her own Tik Tok.

“When I got back to New York, I filmed my first video and started posting almost every day since then, one to five times a day. When I had met with the people at TikTok, they told me that fashion and lifestyle is really undefined. It was mostly people doing dances, or comedy skits, or voiceovers and things like that. And I’m not any of those, I don’t fall into that category. They recommended I find out how to bring lifestyle and fashion onto the platform. I took their advice and started the end of December, so I’ve been on it for one to two months, I had a video of me and my sister doing one of these hand challenges that went totally viral (it has about 42 million views), which is a pretty large number, even for big accounts. I had like 7,000 followers at the time. Within that month, I gained like 300,000 followers from that one video.”

Batsheva is a cast member on a reality show on Netflix named ‘My Unorthodox Life’. The reality show focuses on Julia Haart’s life who was previously living in an ultra-Orthodox Jewish community north of New York City and was a homemaker and mother. She left the community and joined the fashion industry. She’s the co-owner and chief executive of modeling conglomerate Elite World Group and the founder of fashion brand e1972.

In the show, Julia said she was inspired to leave the community by her daughter Miriam. “She just wouldn’t conform. They were doing to her what they had done to me—trying to push her down and mold her into that flat person that they could disappear. I couldn’t let that happen. I literally packed my [expletive] and walked out the door with her.”

A post shared by My Unorthodox Life- Batsheva (@batshevahaart)