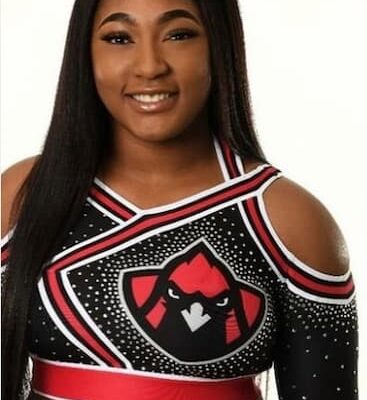 Angel Rice is an American expert tumbler, four-time World Cheerleading Champion and a Guinness book of the world record holder. She is a member of Trinity Valley Community College cheerleading team.

She is the daughter of Bennie R. Rice and Tonyona Olriedge Rice. Her mother, Tonya Rice is a well-known cheer tumbling and power tumbling coach. She serves as the tumbling instructor at National of Tumblers.

Rice has two siblings, an elder sister De’kiera Rice and a younger brother Jaden Rice. Jaden is also a cheer and a member of the Trinity Valley Community College cheer team. He is also a cast member of Netflix’s ‘Cheer’ season 2 where he tumbles alongside his sister Angel.

Rice attends Trinity Valley Community College where she is a member of the cheerleading team.

Angel is a gymnast who is a decorated power tumbler. She is a member of the USA Gymnastics National Power Tumbling team. She began tumbling at the age of three, following the footsteps of her older sister who had already been taking tumbling classes. She was first trained by her mother, who had learned how to train by watching her older daughter in tumbling classes.

Once her mother began working at jam’s Athletics – a training center that offers gymnastics, competitive cheerleading, and tumbling training classes Angel was able to start cheerleading competitively when she turned five.

When she turned 12, she began getting serious about tumbling and her mother enrolled her at Flip City South, where she stayed and became a two-time World Cheerleading Champion.

Since 2013, she has barely missed a U.S. Elite Challenge. She also partook in the 2013 U.S. Trampoline and Tumbling Championships in Kansas City, Mo., the 2013 Stars and Stripes Cup on Daytona Beach, Fla., the 2016 U.S. Gymnastics Championships in Providence, R.I., the 2017 Winter Classic in Battle Creek, Mich. among others.

She has also participated in several international competitions, including the 2013 and 2014 World Age Group Competitions held in Sofia, Bulgaria, and Daytona Beach, Fla. She also partook in the 2017 Canada Cup in Calgary, Canada.

In August 2015 Angel and her mom, Tonya made an appearance on Today. She was invited to break a Guinness World Record, performing 10 double full twists in less than a minute which she did. During the appearance, she said she wants to represent the U.S. in power tumbling competitions and beyond. She added that she would be happy if cheerleading was included in the Olympics. In July 2021, the International Olympic Committee granted full recognition to cheerleading.

Angel set a Guinness World Record in 2015 by performing 10 double full twists in one minute.

Angel is a cast member of Netflix’s reality show, Cheer season 2. In the show, she appears alongside her brother Jaden Rice and the rest of Trinity Valley Community College cheerleaders as they compete against Navarro College Cheer.