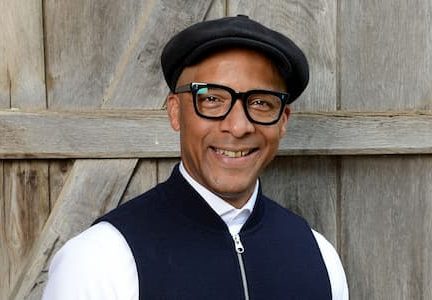 Jay Blades is a modern furniture restorer, upcycler, eco-designer and Award-Winning​ BBC Presenter on The Repair Shop & Money for Nothing.

He was born on February 21, 1970 in London, United Kingdom. He grew up on an estate in the Hackney area of East London.

He stands at an estimated height of 6 feet 3 inches tall.

Jay is the son of Barbara and Trevor. He was brought up by his single mother in East London. He first met his father at the age of 21. He told The Daily Mail that at the time his father revealed he had four other siblings but he found out he actually had 25 in total.

‘He told me I had four other siblings but I then found out that wasn’t true at all. I have 25 in total, including six in America, two in Africa and three in Jamaica. I’ve met 11 of them and I am really close to my half-sister, Sophie.’

Blades was brought up by his mother alongside his stepbrother. He has 25 more step-siblings from his father’s side.

Jay was married to Jade but they divorced in 2015. The two met while they were studying at university. while studying at Bucks New University. Jay was studying a BSc in Criminology and Philosophy, while Jade was completing a BA in Textiles Design and Art. The two volunteered for youth organizations for years before they founded their own charity group Out of the Dark. The charity helps disadvantaged young people to learn design and craft skills, using the help of volunteering experts.

Jay is engaged to Lisa Marie Zbozen, a fitness coach and CEO at THE WKOUT. The couple got engaged on December 23, 2021. Jay revealed the news on his Instagram account adding that he designed the ring and was made by his co-star Richard Talman.

He is previously dated Christine Goodman, who he began dating in 2016. Christine works as a marketing specialist for consumer goods and retailers. It is not clear when the couple broke up.

Jay has three biological children. He revealed to the Daily Mail that at the age of 25 he had fathered two children by different mothers.

‘I didn’t even think about settling down. Growing up, I only knew of two families where the mum and dad were married. I loved the ladies I was with but things didn’t work out and I moved on, even though I always stayed in touch with my children. I didn’t want to be like my father.’

Blades has a daughter known as Zola Erguvanli Blades with his ex-wife Jade. She joined drama school in 2020. He is also a stepfather to his partner’s daughter, Paris Goodman.

THOUGHT OF THE DAY Good morning all please join me in congratulating my beautiful daughter @zola.blades in getting a place at the @nationalyouththeatre Well done Baby you have Definitely put the work in, Love You ?.

Will Kirk is not the son of Jay, they both appear on The Repair Shop. Will is a repair craftsman and expert in wood restoration. He studied Graphic Design and Antique Furniture Restoration and Conservation at the University of the Arts and London Metropolitan University, respectively., He traveled to Italy with the Worshipful Company of Painters and Stainers to represent the UK at the annual Salon Decorative Arts Fair and in 2012 he also set up his own London-based workshop.

Grace Victory is not a biological child of Jay Blades despite her calling him his dad. He mentored her through his social enterprise Jay & Co.

Jay is the host of The Repair Shop on BBC, he appears alongside experts; Steve Fletcher, Suzie Fletcher, Will Kirk, Lucia Scalia, and Dominic Chinea.  The show debuted in 2017on BBC Two but in 2019 it moved to a prime time slot on BBC One, but is now also the face of spin-off show The Repair Shop: Fixing Britain, which takes a deeper look into certain repairs to examine how items shape the way we live now.

Jay is the narrator of The Repair Shop: Fixing Britain on BBC. The show is a spin-off of The Repair Shop. The show offers unique insight into the stories and history behind the shop’s most memorable antiques and heirlooms that have been restored by the expert team since it opened. the show also delve deeper into the untold stories of ordinary people that have walked through its doors, as well as reveal more details about the expert panel. Each episode has a theme, starting with toys, and also takes a look into the history of the theme, giving viewers an educational bonus.

Speaking about the show Jay said; “I absolutely love working on The Repair Shop, and for me, it’s always been about the personal stories behind the items. The new series has made me fall in love all over again, the history is just so powerful and if you close your eyes you actually feel like you’ve been transported back to a moment in time.”

Jay presents Home Fix on BBC One, a DIY show where he shares tips and tricks to help viewers become self-sufficient in their own homes, through a range of simple demonstrations from his own workshop, aided by a rich catalogue of BBC home and garden archive.

Jay has a front gold tooth.

Jay is the author of “Making It: How Love, Kindness and Community Helped Me Repair My Life”. It is a memoir about beating the odds and turning things around even when it all seems hopeless. In the book he shares details about his life, from his childhood growing up sheltered and innocent on a council estate in Hackney, to his adolescence when he was introduced to violent racism at secondary school, to being brutalized by police as a teen, to finally becoming the presenter of the hit primetime show The Repair Shop.

Jay has dyslexia. He said while he was in school he was bullied and deemed thick as nobody realized he had dyslexia. He left school at the age of 15 and at the age of 30 he enrolled at the university and that is when he was diagnosed.

“they found out that I had the reading ability of an 11-year-old. I would say at least 80-90% of us were dyslexic, but none of us were told that we were. When I found out at university, the amount of support I got was unbelievable. I was, like, why did no one do this before?”

Jay Blades Learning to read at 51

Jay has a documentary titled, ‘Jay Blades; Learning to Read at 51’. The documentary follows him as he works with a charity that organises volunteer coaches to work one-on-one with readers, using a system that was launched in prisons. Blades will join other people also learning to read and together they will support, cajole and encourage one another to get over their fears of the written word.

Along the way, he will revisit key moments in his life that were shaped by struggling to read: from his being put in the ‘learner’ class at school, and receiving an important letter from hospital and having to find a stranger on the street to read it to him, to taking a series of dead-end jobs because he had no formal qualifications.

The documentary goes behind closed doors to show how being dyslexic has shaped Blades, impacting how he organises his upholstery business, manages on The Repair Shop without scripts, and struggles each day with his vowels and consonants as he tries to learn phonics.

He said that his motivation to learn how to read was his daughter Zola as he wants to be able to read to her. “Even though she’s 16 now, I’ve never been able to read her a story. I also want to inspire people like me who are dyslexic.”

He also revealed that his Repair Shop co-stars had no idea he was unable to read for three years. The producers would give him pages of notes and he never read them.

“For me, my role is just two people having a chat. When I told everyone they were really supportive and couldn’t believe I’d been doing everything naturally without notes. I wish I’d told them sooner.”

Good morning all, I will lose some followers because of this video but this is how I feel and I want to see solutions in my lifetime. Let me know what you think, please. http://bit.ly/JnCo1960What (LINK IN BIO)