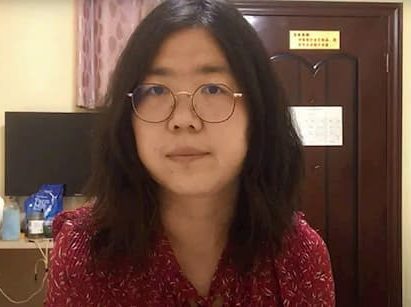 Zhang Zhan is a former Chinese lawyer and independent journalist who has been sentenced to four years in prison by a Shanghai court for reporting on the early stages of the outbreak in Wuhan. She was found guilty of “picking quarrels and provoking trouble.”

In early February 2020, Zhang traveled to Wuhan from Shanghai to report on the pandemic and subsequent attempts to contain it, just as the authorities began reining in state-run and private Chinese media. She shared videos that showed crowded hospitals and residents worrying about their incomes.

She was very critical of the government in her dispatches, asking why it had tried to silence whistle-blowers about the virus and questioning whether Wuhan’s lockdown had been enacted too harshly.

According to NY Times Asia, she directly challenged propaganda exalting the government response. Almost since the very beginning of the outbreak, the Chinese government has been locked in an unrelenting campaign to quash criticisms that it initially tried to conceal the virus.

In May she abruptly stopped responding to messages and posting and that is when her friends learnt she had been arrested and taken back to Shanghai.

Zhang was arrested and detained on May 15, 2020, on suspicion of “picking quarrels and provoking trouble.” She had initially gone missing on May 14 in Wuhan. On June 19, 2020, Pudong New Distict Procuratorate approved her formal arrest. She was held at Pudong New District Detention Center in Shanghai.

In protest of her arrest, she started a hunger strike. According to her lawyer the detention center authorities had begun to forcibly feed her. On December 8, 2020 her lawyer said that her health was deteriorating and that the authorities and her other cellmates have been force feeding her mainly through an intubated feeding tube. As a result, she suffers from stomach pain, dizziness, and weakness while walking and can not go outside. She also reported that she was examined by a doctor and has low blood pressure. In December, lawyer Zhang Keke discovered she had a feeding tube in her nostril and was in restraints to prevent her from removing the tube.

She was accused of traveling to Wuhan on February 3, 2020 and that she “sent a large amount of false information” on WeChat, Twitter, and YouTube and “accepted interviews with overseas media Radio Free Asia and Epoch Times and maliciously stirred up the Wuhan epidemic situation.”

On December 27, 2020 she was sentenced to four years in prison by a Shanghai court after she was found guilty of “picking quarrels and provoking trouble.” The offense is commonly used by the Chinese government to target dissidents and human rights activists.