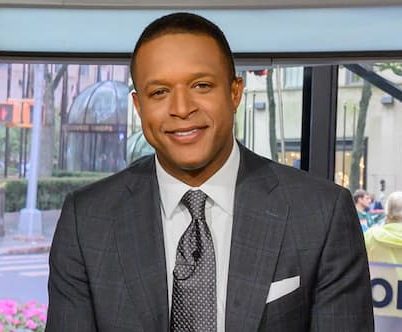 Craig Delano Melvin is an American media personality working for NBC News and MSNBC. He serves as a news anchor on Today and also co-hosts the show’s third hour and also anchors MSNBC news on weekdays.

Melvin belongs to the African-American ethnicity.

Craig is an American national.

Melvin has a Bachelor of Arts in Government from Wofford College in Spartanburg, South Carolina.

He is the son of Lawrence Melvin and Betty Jo Melvin.

Craig has two brothers Lawrence Meadows and Ryan Melvin. His older brother, Lawrence Meadows died of colon cancer on December 12, 2020. He shared the news on his Instagram page where he revealed that Lawrence was diagnosed with stage 4 colon cancer in 2015 at the age of 39. He was a Baptist minister and funeral home director.

Melvin is married to Lindsay Czarniak since 2011. She is an American sports anchor and reporter. She serves as a studio host for NASCAR coverage and a sideline reporter for NFL games on Fox Sports. She previously serves as a SportsCenter anchor on ESPN, after spending six years with WRC-TV.

The couple met in 2008 when Craig was working at NBC4 at the time Lindsay had just arrived on set after three weeks at the 2008 Beijing Olympics (Lindsay had joined NBC4 in 2005). After a month Lindsay told Craig she was hosting a charity gala and suggested he joined her along with others from NBC. After the gala, he gave her a ride to the after-party and then back to her apartment near Dupont Circle.

They kept seeing each other casually for the next six months, meeting for drinks or hanging out at home. The couple later separated and began seeing other people but they later got back together and in March 2011 he proposed while in Miami.

Craig is an MSNBC anchor and NBC news correspondent. He is a news anchor on Today and also co-hosts the show’s third hour and also anchors MSNBC news on weekdays. He previously served as a Saturday morning Today co-host alongside Dylan Dreyer and Sheinelle Jones.

He joined MSNBC in July 2011 as a daytime anchor and a reporter for NBC News. In 2016 he became an anchor of MSNBC Live on Saturdays and Sundays. He also served as a contributor for “TODAY,” and filled in as host for Lester Holt on “Weekend TODAY” becoming a weekday news anchor on Today in September 2018.

During his tenure he has covered tragic mass shootings across the country, including Dallas and Orlando, Florida, in 2016; Charleston, South Carolina, in 2015; the Navy Yard in Washington, D.C., in 2013; and Sandy Hook Elementary School in 2012. Melvin reported extensively on police-involved shootings and subsequent protests in Baltimore in 2015 and Ferguson, Missouri, in 2014.

He also covered the 2016 death of Muhammad Ali, the 2016 EgyptAir MS804 crash, two Olympic Games and six Super Bowls, the 2018 Winter Olympics in PyeongChang and the 2019 Super Bowl in Atlanta.

Prior to joining NBC News and MSNBC in July 2011, Melvin was a weekend anchor for WRC, NBC’s owned-and-operated station in Washington, D.C.

He began his career in high school where he served as an “Our Generation” reporter for WIS, an NBC-affiliate in Columbia, South Carolina. While there he became the youngest recipient of an Associated Press award for a report on innovative teaching.

In July 2001 he returned to WIS, after college, as a news photographer and producer, before becoming a reporter for the station’s morning news team, producing his “Craig Cam” live segments. He was later promoted to news anchor for the weekend morning newscast and the weekend evening newscasts before heading the weekday newscasts.

His actual salary is unknown but some sites report that he earns an annual salary of around $3 million.

He has an estimated net worth of $6 million.