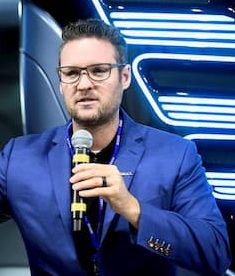 Trevor Milton is an American businessman who is the founder and executive chairman of Nikola. He stepped down as executive chairman on September 21, 2020 after a short seller accused him and the hydrogen and electric truck startup of misleading investors and overstating the value of a business deal.

He is a member of The Church of Jesus Christ of Latter-day Saints. He spent 18-month on a church mission to Brazil after he finished high school.

He has an estimated net worth of 3.2 billion USD.

Trevor is the son of Bill Milton, a retired Union Pacific Railroad manager and Sally Milton, a realtor. His mother died in May 1997 of cancer, while Trevor was 15.

His father inspired his interest in the transportation industry as he was a manager for Union Pacific Railroad. During an interview with trucks.com, he said his drive grew from the encouragement he received from his father. “My dad got his degrees in business and finance, and while he wasn’t an entrepreneur, he wanted me to be one.”

He also added that a family crisis helped him build his character. When he was eight his family moved back to Utah and things got tough as his father had to quit his job and begun consulting for Union Pacific, mostly in Las Vegas, making the long drive to and from the Milton home in Kanab as often as possible.

Milton has four siblings, three sisters and a brother. He said that together with his siblings he “had to learn to survive as a family with a mother who was bedridden and a father who had to go to work 4-5 hours away. It was very tough, the toughest time of our lives, but I wouldn’t trade it for the world. ”

Milton married Chelsey Bergmann in 2017 in Wyoming. On October 24, 2017 he wrote on Twitter in parts, “Can’t believe I got to marry a woman that is much better than I am. It happened this weekend in Wyoming! I’m now married!”

Chelsey was a licensed “Master Esthetician” in Utah from January 2012 until the license expired in September 2019. She attended Utah Valley University and Cameo College of Essential Beauty.

Milton began his career after dropping out of college, he started an alarm sales company in Utah called St. George Security and Alarm. He eventually exited the business for $300,000. He later launched an online classified ads website that sold used cars, called uPillar.com, which eventually failed.

Milton later joined forces with an engineer named Mike Shrout who had developed compressed natural gas (CNG) conversion technology for diesel engines and started a company called dHybrid, Inc. In October 2012 Trevor together with his father launched dHybrid Systems, LLC. In 2014 he sold the company to Worthington Industries.

Milton founded Nikola Motor Company in 2015 with his brother, Travis, as the director of operations with a background in construction and remodeling.

On September 10, 2020, Hindenburg Research published a report accusing Milton of making false statements and characterizing Nikola Motor Company as “an intricate fraud” over many years.

“for over a decade, instead of developing his own capabilities, Trevor has established an undeniable track record of taking from others and claiming technology as his own. He has quietly used off-the-shelf products from third-parties while loudly claiming to have vast proprietary technology. Trevor would then leverage what he had and repeatedly mislead customers, partners, and investors in order to build his credibility and take his concept to the next level…Based on our findings, we believe Nikola is an intricate fraud built on dozens of lies over the course of its founder Trevor Milton’s career, which he has parlayed into a $20 billion cloud of smoke and partnerships with some of the top auto companies in the world.”

Following the allegations, Nikola released a press statement claiming that the Hindenburg report ” was designed to provide a false impression to investors and to negatively manipulate the market in order to financially benefit short sellers, including Hindenburg itself.”

On September 20, 2020 Milton stepped down as the executive chairman and a member of the board of Nikola amid allegations of fraud and a Securities and Exchange Commission probe into whether the company had made false statements to investors. He however denied the allegations that were made earlier in the month in an investment report from Hindenburg Research. He said he decided to step aside voluntarily.

Nikola released a press statement announcing that Trevor had resigned. In the statement they said that Trevor approached the Board of Directors and proposed to voluntarily step aside as Executive Chairman and from the Board. Stephen Girsky has been appointed Chairman of the Board, effective immediately.

In his statement he said; “Nikola is truly in my blood and always will be, and the focus should be on the Company and its world-changing mission, not me. So I made the difficult decision to approach the Board and volunteer to step aside as Executive Chairman. Founding Nikola and growing it into a company that will change transportation for the better and help protect our world’s climate has been an incredible honor.

As we move forward, I am confident Steve is the right leader to guide our vision at the Board level. In addition to being an early believer and supporter of Nikola, Steve has more than 30 years of experience working with OEM leaders, suppliers, dealers, labor leaders and national policy makers, and has served as a director of numerous public companies.

We’ve built a deep bench of talent over the years, and I am confident that Nikola’s Chief Executive Officer, Mark Russell, supported by Chief Financial Officer, Kim Brady, and the rest of the leadership team will advance our goal of making Nikola the global leader in zero-emissions transportation. I want to thank all of Nikola’s employees, investors and partners who have shared in my vision and rallied behind Nikola during this time.”

There is no information about Milton’s arrest but a Twitter user had claimed that the DOJ and FBI had arrested Milton at Sky Harbor Airport Phoenix.