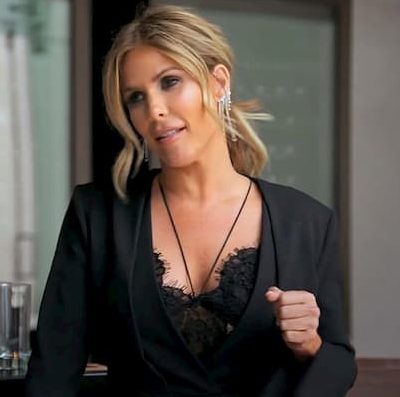 She graduated from the University of Southern California in 1997, with a bachelor’s degree in theater arts.

While at the University of Southern Calfornia, she was a member of the Kappa Alpha Theta sorority and served as a mentor.

There are no details regarding Tracy’s mother.

Tracy is the daughter of Ronald Tutor, a multi-millionaire investor and entrepreneur. He is the CEO of Tutor-Perini, one of the largest general building contractors in the U.S., and the president of Tutor-Saliba, a heavy civil works construction company. He has an estimated net worth of $790 million. He has been married thrice and is currently married to Alia Tutor.

Tracy has two siblings from her father’s second marriage.

Tacy was married to Jason Maltas, the president of Gordon Gibson Construction, which is headquartered in Santa Monica, California, for 13 years before they divorced in citing “irreconcilable differences.” They agreed on joint custody for their daughters and agreed not to let the kids appear on MDLLA.

The couple had signed a prenuptial agreement that divided their assets equally, and neither requested spousal or child support. According to the divorce settlement, Tracy got to keep their $18.0 million home, the Cadillac Escalade, and the Range Rover. She will also have to pay for their daughter’s equestrian classes and the nanny’s expenses.

She has two children from her marriage to Jason; Juliet Maltas and Scarlett Maltas.

Deep in #vacation mode…at dinner with my girls ??☀️#dominicanrepublic #springbreak 18

Tracy is in a relationship with Eric Anderson, a Los Angeles personal trainer. He formerly worked as a personal trainer for Dogpound. He is also a brand ambassador for EBOOST, a company that sells products including energy drinks and workout supplements.

The couple met while they were training together. Tracy made the relationship Instagram official in July 2020.

Tracy is a real estate agent, who learned about the business from her father. In 2001 she joined Sotheby’s International Realty after acquiring experience at Tutor-Perini. After nine years at Sotheby’s, she worked at brokerages Partners Trust and The Agency in Beverly Hills. In 2014 she joined Douglas Elliman.

In 2014 she joined Douglas Elliman and became one of the top brokers in the real estate brokerage firm. She mostly specializes in properties in West L.A., like Brentwood, Beverly Hills, and Bel Air.

“I am really interested to see where the values go in Brentwood, Santa Monica, and the Palisades. We’ve seen big numbers in the Hollywood Hills and Beverly Hills. I think the next big numbers will be Brentwood.”

She consulted on the sales of some $400 million worth of branded real estate for the Amangiri at Canyon Point, a luxury hotel and resort in Utah. Some of her clients are associated with the entertainment industry. Some of her clients include Edward Norton and Channing Tatum.

Tutor is a cast member of Million Dollar Listings: Los Angeles which airs on Bravo. She joined the show on season 10 becoming the first female realtor to appear on the show.

Tracy’s net worth is unknown.

Last night was a rollercoaster? of moods on #MDLLA, who else enjoyed the ride to $500 million and what are our thoughts on Scott Gillen?⠀ ⠀ #milliondollarlisting #mdlla #bravo #season12 #douglaselliman #tracytutorteam #malibuseries #luxurylistings #malibu