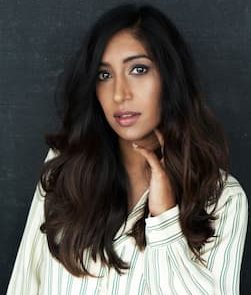 Tina Daheley is a British media personality serving as an anchor for the BBC, both on television and radio. She anchors The Radio 2 Breakfast Show with Zoë Ball and also serves as a relief presenter on the BBC News at Ten and BBC News at Six and previously co-presented the BBC Three political discussion show Free Speech.

Daheley was born on 16 April 1981in London, United Kingdom.

Tina attended The Ellen Wilkinson School for Girls in Ealing and studied computer science at Brunel University before completing a Master’s degree in journalism at the University of Leeds.

Daheley is the daughter of Parminder Daheley and Charanjit Daheley who are first-generation immigrants of Indian heritage, who themselves grew up in Nairobi and Tanzania and  “drilled” into her the need to have a “proper” profession. Her dad works as an MOT tester for Barnet Council. During an interview, she revealed that her parents encouraged her to work hard.

“My parents said I needed to work twice as hard as everyone else… I never even considered doing a job for pleasure.” My parents were, to be fair, supportive in my career choice.”

Tina was brought up alongside her brother, Jagdeep.

Daheley is in a relationship with Kane William-Smith, founder of comedy ticket-selling site Joke Pit. The two met in Ibiza. Daheley was on a girls’ trip she had won when working with Chris Moyles on Radio 1, while Kane was on a family holiday.  They later got engaged with Tina confirming her engagement in January 2018, sharing a photo of her sparkling ring on Instagram. She also revealed in an interview that her fiance supports her.

“In the past, other people have felt emasculated or threatened about what I do, but Kane is so grounded and down to earth, and doesn’t care about celebrity and showbiz. Being where I am now and achieving so much, I put a lot of that down to his incredible support. It’s really interesting, the dynamic of our roles. Normally, if it’s a high-flying man, the woman has the more traditional role. But we have more of a role reversal. He really champions and supports me.”

Tina and her fiance are expecting a baby in 2021. She shared an Instagram photo of her baby bump in December 2020 and revealed she is over five months pregnant with a caption,

“Some exciting news to share! Beyond thrilled to be welcoming a new addition to our family in Spring 2021.”Thank you @bbcradio2 family for all your lovely messages this morning.”

Daheley joined the BBC in 2007 and has presented television coverage of women’s football and co-presented the BBC Three political discussion show Free Speech, alongside Rick Edwards. She has also presented the 60 Seconds news on BBC Three, E24 on the News Channel and Revealed (BBC Two’s Switch Zone). She is the former host of the 1Xtra news show, the flagship news programme for BBC Radio 1Xtra and was the sports newsreader on BBC Radio 1’s The Chris Moyles Show from February 2010 until the show ended in September 2012. She went on to host the news, sport, and weather bulletins for Radio 1 Breakfast with Nick Grimshaw from 24 September 2012, until she left Radio 1 on 10 August 2018.

Since July 2016, Daheley has been a relief presenter on BBC Breakfast and Victoria Derbyshire. In September 2016, she became one of the main presenters of Crimewatch, alongside Jeremy Vine. On Tuesday 29 May 2018, Daheley made her debut on the BBC News at Six and on Sunday, 8 July 2018, She made her debut on the BBC Weekend News and the BBC News at Ten, anchoring the corporation’s flagship evening news programme for the first time. In January 2019, Daheley joined BBC Radio 2 to become the newsreader on The Radio 2 Breakfast Show when Zoë Ball took over as presenter from Chris Evans.