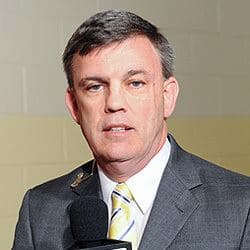 Teddy Atlas is an ESPN boxing commentator. He serves in a similar capacity for ESPN Boxing Specials, and he regularly gives analysis to Sports Center and ESPNEWS. Teddy Atlas joined ESPN in September 1998 as a ringside analyst for the weekly series ESPN2 Friday Night Fights, which started on October 3, 1998.

He was born on July 29, 1956. He had a turbulent and unruly youth. He was detained multiple times after dropping out of school. He was convicted of armed robbery and sentenced to Rikers Island. Atlas was involved in a street brawl in Stapleton, Staten Island, in which his face was sliced severely.

Atlas was severely sliced in the face with a “007” flick knife during a street fight in Stapleton, Staten Island. The wound required 400 stitches to close, with 200 on the outside and 200 on the inside of his face. He was left with a distinguishing scar as a result of the incident.

His height is not yet detailed.

He is a beloved son to Dr.Theodore A. Atlas, who was a doctor, and Mary Riley Atlas (mother). His mother was a former Miss America contestant and model of Irish heritage. His father was of Hungarian Jewish ancestry. Atlas was nurtured in his mother’s Catholic faith and spent his summers with his family’s friends in Spring Lake, New Jersey.

He is happily married to Elaine Atlas

He is a loving father of two, Teddy III and Nicole.

Atlas worked for ESPN as a commentator, first on ESPN2’s Friday Night Matches and Wednesday Night Fights. He then moved to  ESPN’s Premier Boxing Champions fights. Atlas was suspended twice by ESPN on January 25, 2008, once for intimidating a crew member and the second time (for one week) for confronting the network’s boxing program director, Doug Loughrey.

Additionally, he offers ESPN boxing analysis. Atlas has been a well-known boxing trainer since 1976.  Atlas has also spent six years at Cus D’Amato’s famed Catskill Boxing Club. He was Mike Tyson’s trainer for the first four years of his career, he prepared him for the ultimate world heavyweight championship. Atlas received the prestigious Sam Taub Award for Excellence in Broadcast Journalism from the Boxing Writers Association of America in 2001 for his ringside commentary for ESPN.

He worked with actor Willem DeFoe to prepare him for his role as a fighter in the film “Triumph of the Spirit,” in which he also choreographed combat scenes and appeared.  He also appeared in the HBO film “Only in America” and choreographed fight scenes for the TV series Against The Law (the Don King story). Atlas worked as a ringside analyst for Showtime, ABC Wide World of Sports, and HBO radio broadcasts before joining ESPN.

He earns a salary of approximately 87,000 annually.

His net worth has amassed to approximately $ 1.5 million