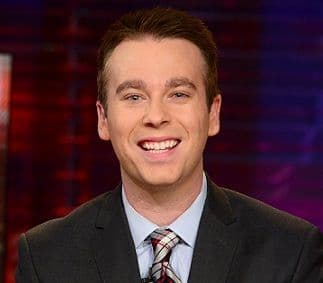 Randy Scott is the host of SportsCenter: AM, which airs weekdays from 7 to 10 a.m. and kicks off sports fans’ days. He became an anchor for ESPN’s main news and information program in June 2012. He co-anchors together with Nicole Briscoe. Scott worked as an anchor/reporter for NESN in Boston (2010-12) and WINK-TV in Fort Meyers, Fla. before joining ESPN.

He was born and raised in Vienna, Virginia. He is in his early forties.

He stands at a height of 6 feet 0 inches tall.

He is a beloved son to the US Navy. More details of his parents’ names are not yet disclosed.

He is happily married to his beloved wife, Shannon Mulaire. The duo used to work together at NENC, where they met for the first time and later fell in love and began dating. The couple has been married for seven years

Scott became an anchor for ESPN’s main news and information program in June 2012. He worked as an anchor/reporter for NESN in Boston (2010-12) and WINK-TV in Fort Meyers, Fla. before joining ESPN (2006-10). Scotts was previously the Sports Director at WNEG-TV in Toccoa, Georgia (2005-06), as well as an anchor/reporter at KSWO-TV in Lawton, Oklahoma (2004-05). Scott won “Best Sports Feature” awards from the Associated Press and the Society of Professional Journalists (SPJ.

Additionally, he was also named “Best Sports Promotion” by the Oklahoma Association of Broadcasters in 2005. Scott previously worked for WNUR sports radio as a sports anchor. He began his career as an anchor and reporter for KSWO-TV in Oklahoma. Moreover, he moved to WNEG-TV, where he became a sports director, launching his career in sports media. He joined WINK-TV after working on the post for a period. Eventually, he returned to NESN in Boston as an anchor and reporter before joining ESPN in June 2012.

His networth s estimated at $2 million.