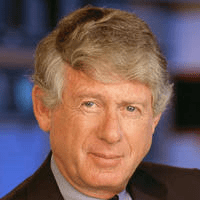 Ted Koppel (Edward James Martin Koppel) is a British-born American broadcast journalist, best known as the anchor for Nightline, from the program’s inception in 1980 until 2005. Before Nightline, he spent twenty years as a broadcast journalist and news anchor for ABC. After leaving Nightline, he worked as managing editor for the Discovery Channel and a contributor to Rock Center with Brian Williams. He is currently a special contributor to CBS News Sunday Morning.

Koppel was a pupil at Abbotsholme School, in Derbyshire. In 1953, when he was 13, the family emigrated to the United States.

While there he went to the McBurney School, a private preparatory institution in New York, he attended Syracuse University, from which he graduated at age 20 with a Bachelor of Science degree.

He was a member of the Alpha Chi chapter of the Pi Kappa Alpha fraternity. His roommate recalls that Koppel “was incredibly focused and had a photographic memory. He remembers almost every conversation he ever had with anybody. And the man never needs sleep.”

Koppel then went to Stanford University, where he earned a Master of Arts degree in mass-communications research and political science.

His parents were German Jews who had fled Germany after the rise of Adolf Hitler and Nazism. In Germany, Koppel’s father had operated a tire-manufacturing company.

He and his wife moved to England in 1936 where he was invited by a home secretary to set the company. When war broke out in Europe in 1939, Koppel’s father was declared an enemy alien and imprisoned on the Isle of Man for a year and a half.

After he was released from internment the family moved to the United States, where his mother, Alice, became a singer and pianist, and his father, Edwin, opened a tire factory.

Ted is the only child.

In 1962, Koppel married Grace Anne Dorney. The couple met at Stanford in the early 1960s, where they both earned master’s degrees. Grace Anne is a lawyer.

The couple have four children: Andrea; a former journalist, Deirdre, Andrew, and Tara.

Andrew Koppel was found dead in an apartment in New York City on May 31, 2010, reportedly after a day-long drinking binge. A post mortem toxicology report identified illicit drugs.

Koppel began his career as a copyboy at The New York Times and as a writer at WMCA Radio in New York. In June 1963, he became the youngest correspondent ever hired by ABC Radio News, working on the daily Flair Reports program.

In 1966, he became the ABC News correspondent for the Vietnam War, moving from radio broadcasting to national television.
In the mid-1970s, Koppel took a year off from his career, to stay home with his children so that his wife could complete her education at Georgetown Law School. His decision upset ABC News president Roone Arledge, who demoted Koppel from news anchor when he returned to the network.

He became the host of Nightline in March 1980. In 1990, ABC News ran a one-hour special called “The Best of Nightline with Ted Koppel.” While hosting Nightline, Koppel also hosted a series of special programs called Viewpoint, beginning in 1981, which provided media criticism and analysis.

Since March 2016 Koppel has served as a special contributor to CBS Sunday Morning. Prior to this, on December 12, 2011, he made his first appearance on NBC Nightly News with Brian Williams as a reporter and later become a special correspondent for NBC’s Rock Center until the show’s cancellation.

Before, Koppel signed up as an opposite editorial-contributing columnist, effective January 29, 2006, for The New York Times. Starting in June 2006, he provided commentary to Morning Edition, All Things Considered, and Day to Day on National Public Radio, joining NPR’s other two Senior News Analysts, Cookie Roberts and Daniel Schorr. As such, he participated in the annual NPR Fourth of July reading of the Declaration of Independence in 2007. Koppel ended his regular commentary on NPR in April 2008, and last appeared as a news analyst on the network in 2014.

In 2001, a doctor diagnosed Grace Anne Dorney Koppel with chronic obstructive pulmonary disease, or COPD, telling her she had just three to five years left to live.

She and her husband, held each other in bed that night and sobbed.

She was given a prescription for a treatment called pulmonary rehabilitation, as nearly two-thirds of patients report positive outcomes from the treatment, according to one study. But her doctor told her to write out her advance directives in case her death came suddenly.

“If someone in a white coat asks you that, it will slap your soul,” she said. “I was not ready for that. I guess none of us are.”

As lung damage increases, a gradual onset of COPD can often go unnoticed for years. By the time she visited a doctor, Dorney Koppel, was struggling to breathe every day and couldn’t manage to walk more than a few dozen yards.
Tests showed the former smoker had lost 75% of her lung function. She needed to use a wheelchair, because even walking a short distance had become impossible.

His salary has been estimated at $10 million a year. 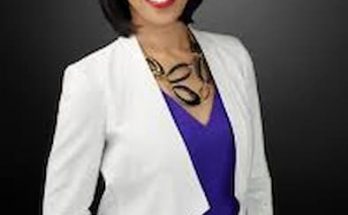