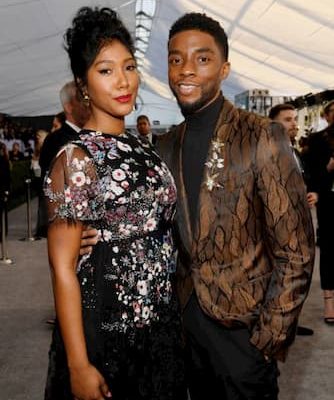 Taylor Simone Ledward is an American musician and the wife of the late actor Chadwick Boseman who is best known for his role as Blank Panther. Chadwick died on August 28, 2020 after a four year battle with colon cancer.

Taylor is a singer who has a bachelor’s degree in Music Industry Studies. She was an active part in the school’s jazz band, where she was the lead singer.

Chadwick was in a relationship with Ledward, it alleged that the couple got married in 2020 although there are no details about the wedding. The couple got engaged in late October 2019.

The couple was first spotted together in 2015 when pictures of them traveling together at the Los Angeles International Airport surfaced. They were later spotted holding hands after Boseman’s appearance on Jimmy Kimmel Live! back in June 2017. They made their public debut in January 2019 at the Screen Actors Guild Awards.

Taylor and Chadwick had no children.

Chadwick died on August 28, 2020 of colon cancer at his home in the Los Angeles area with his wife and family by his side according to her publicist Nicki Fioravante.

His family released a statement saying that he had continued to work while undergoing treatment, appearing in a series of films while also going through surgeries and chemotherapy.

“A true fighter, Chadwick persevered through it all, and brought you many of the films you have come to love so much from Marshall to Da 5 Bloods, August Wilson’s Ma Rainey’s Black Bottom and several more- all were filmed during and between countless surgeries and chemotherapy. It was the honor of his career to bring King T’Challa to life in Black Panther.”

Boseman was diagnosed with stage III colon cancer in 2016 although he never shared the diagnosis publicly. The disease progressed for the past four years to stage IV.