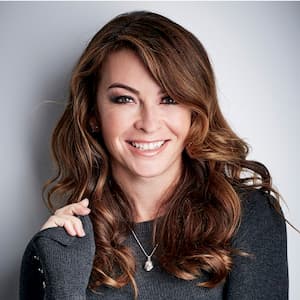 Suzanne Perry is a British media personality working for BT Sports covering the channel’s content including  MotoGP World Championship, FIM Speedway and the World Rally Championship. She previously was a co-presenter for Channel 5’s The Gadget Show and also presented Live Elite League Speedway on Sky Sports as well as covering MotoGP for the BBC for 13 years .

Perry is the daughter of Tony Perry and Irene Mary Perry. She says that her parents were extremely hardworking, “both my parents were self-employed and worked extremely hard. My father was in the music industry, promoting a rock band, Trapeze, who were big in the States. When I was growing up he was over in Texas quite a lot and my mum ran her own distributorship for a cosmetics company, from home.”  Her godfather ,Mel Galley was an  English guitarist.

It’s not known if she has any siblings.

Perry is married to Bastien Boosten ,a Dutch bussinessman whom she met while filming The Gadget Show and got engaged in September 2008. The duo later exchanged their marriage vows in Las Vegas on 6 August 2009 in a 30 minutes ceremony conducted by Elvis impersonator. Suzi was the first celebrity bride to post her wedding pictures on social networking website Twitter.

Suzi was previously married to Steve Bullock, a model from Sheffield, from 1995 until 2002 when the two separated. They first met in February 1994 on a photoshoot in Tenerife, became engaged ten months later in November 1994, and married on December 6, 1995. After divorcing Bullock, she had a three-year relationship with fellow TV presenter Nick Knowles before they went separate ways.

Suzi doe not have any children of her own but she is a step mum to her husband’s daughter from a previous relationship named Laurien. who was born in1996,

Perry suffered from a life-threatening ectopic pregnancy which almost killed her. While she was 8 weeks pregnant and was over the moon with the news of having a baby with then-fiancé Bastien, she was rushed to the West Middlesex Hospital on February 17 where she almost died waiting for surgery which took place after she had lost four pints of blood. After multiple miscarriages and undergoing through a failed IVF; she has lost all hope for having her own children.During an interview with the mirror. she said, “My biggest disappointment is not being able to have kids. I bumbled through life assuming I was going to have a family one day and it just didn’t work out.”

Perry joined BT Sports  in March 2016  presenting the channel’s motorsport content, including the MotoGP World Championship, FIM Speedway and the World Rally Championship. Her entry to BT Sports  coincided with the news that UK terrestrial TV coverage of Formula 1 was moving from the BBC to Channel 4.

Perry is mainly known as a motor sports correspondent, reporting on motorbike racing for BBC News as well as presenting other sports-related programmes, including Wimbledon, the Boat Race, the London Marathon, Royal Ascot and the Great North Run. She helped to present the 2004 Summer Olympics in Athens.  Perry was part of the BBC presenting team at the 2010 Epsom Derby and Royal Ascot.

On 21 December 2012,  Perry  replaced Jake Humphrey as presenter of the BBC’s Grand Prix coverage from the 2013 season, covering 10 live races and 10 highlight shows. She also wrote regular blogs for BBC Sport to give a behind-the-scenes look at F1. This was the first time a woman had taken on the full-time main anchor role in Formula One on British TV.

In 2015, it was announced Perry would present a new F1 show for BBC Two, “Formula 1 Rewind”, with Murray Walker. The show involves Walker looking back at some of the BBC’s archives.

Suzie   co-presented  Channel 5’s The Gadget Show , a hi-tech weekly programme, alongside Jason Bradbury, Jon Bentley, Ortis Deley and Pollyanna Woodward since 2004. She also created the current theme music for the Gadget Show in 2011 as part of a Gadget Show challenge.

She was also the original presenter of Live Elite League Speedway on Sky Sports. She also appeared on the 2002-03 revival of Treasure Hunt, where she took the “skyrunner” role made famous by Anneka Rice.In 2010, Suzi appeared on ITV’s All Star Mr & Mrs with husband Bastien Boosten.Her other shows include Housecall, Superstars, City Hospital, How to take Stunning Pictures and Holiday.

Perry also presented Suzi Perry’s Formula 1 Anthems on BBC Radio 2 during her time with BBC’s Formula 1 commentary team. She also began a series of live Instagram broadcasts, called ‘Suzi’s Breakfast Club’, that incorporated interviews with people from the worlds of sport, music and entertainment during the coronavirus lockdown of spring 2020.

In September 2016, Perry was made an honorary Doctor of Engineering for services to science, technology, and work encouraging young entrepreneurs

Other than being a presenter, Suzi is also involved in charity work. She  is a patron of Promise Dreams, a charity launched in 2001 and based in her home town of Wolverhampton. Promise Dreams raise money for seriously or terminally ill children, to provide treatment, help and support for them and their families. She also supports @alzheimersuk @wwf Two Wheels For Life, RSPCA and Sport Relief amongst other charities.

Perry has an estimated net worth of $5 million.