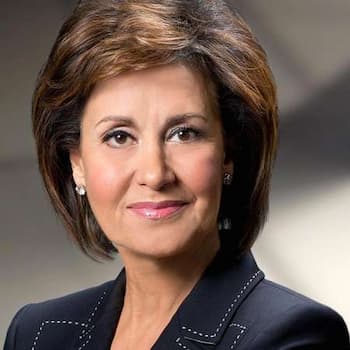 Susie Gharib is an American media personality serving as a contributor to “Nightly Business Report” and as a Senior Special Correspondent for Fortune. She previously served as a reporter positions at Newsweek, the Associated Press, and The Plain Dealer and also worked for the  Business Times on ESPN.

Susie was born in 1950 in New York, New York, United States but her exact date and month of birth are not revealed.

Susie was born and raised up by her parents in New York. She is the daughter of a Cleveland anesthesiologist. She is of Iranian descent.. No further information regarding her parents including their names is available.

Susie was brought up alongside her three sisters one of who is an endocrinologist in Boston.

Susie is married to  Fereydoun Nazem an entrepreneur and philanthropist. He currently serves on the Science and Technology Advisory Board of Columbia Presbyterian Medical Center. Furthermore, he is a member of the New York Society of Security Analysts and the Economic Club of New York.   Nazem received a Bachelor of Science degree in biochemistry from Ohio State University, a Master of Science in physical chemistry from the University of Cincinnati, and an MBA in finance from Columbia University. He also did doctoral work in quantum physics at Washington University. He previously worked as a chemist at Keebler and Company, and Matheson Coleman and served as a securities analyst and Assistant Vice President at Irving Trust Company (now Bank of New York) before founding his own venture firm Nazem & Company, a New York-based investment firm.

Gharib and her husband have two adult children, son Alexi, MD MBA who is Founder/CEO of Nomad Health, and daughter Taraneh, MD who is a Fertility Specialist at Mount Sinai Medical Center in New York.

Gharib serves as a Senior Special Correspondent for Fortune where she conducts a series of video interviews with some of the world’s top CEOs and business leaders for Fortune.com covering news topics as well as leadership lessons. Gharib is also a contributor to “Nightly Business Report”. Previously, Gharib spent 16 years as the Co-Anchor of “Nightly Business Report” (NBR), the longest-running business news public television program.

Gharib previously worked at some of America’s most prestigious print and broadcast organizations, including CNBC, NBC, ESPN, and WABC-TV/ New York. She worked at Fortune magazine where she was a senior writer and associate editor. Her previous work includes reporter positions at Newsweek, Associated Press and the Cleveland Plain Dealer. She is on the Board of Trustees of Case Western Reserve University, the Board of Advisors of Columbia University’s School of International and Public Affairs, and a member of the Economic Club of New York.

In 2012, Gharib received the Elliot V. Bell Award from the New York Financial Writers’ Association for a significant contribution to financial journalism. She is the recipient of a 2013 Gracie Allen Award for NBR’s profile of Harvard University’s first female president Drew Gilpin Faust. She also received an earlier Gracie Award in 2001 as the top anchorwoman of a national news program.

Susie has also won the Fulbright Award in 2012 for furthering global business understanding, and the “Front Page Award” from the Newswoman’s Club of New York in both 2007 and 2002. Her 2002 Front Page Award was for an outstanding panel discussion with high-profile CEOs on how to restore investor confidence in the aftermath of the business scandals at Enron and WorldCom. She has also been named one of the nation’s 100 most influential business journalists by the editors of TJFR, an industry publication.

Her salary is not available.