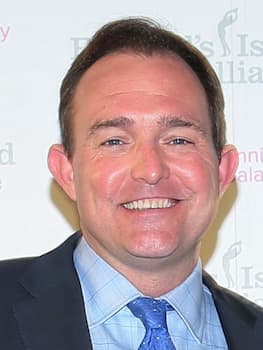 Brian Sullivan is an American media personality serving as an anchor of CNBC’s “Worldwide Exchange”  which broadcasts from CNBC Global Headquarters in Englewood Cliffs, N.J. He is also Senior National Correspondent for the network and previously served as an anchor at Fox Business News as well as a producer, reporter and anchor for Bloomberg Television.

Brian attended James Wood High School in Winchester, Virginia and a graduate of Virginia Tech double majoring in Political Science and history, where he played on the rugby team and is a member of the Zeta Psi fraternity. He then received a law degree from Brooklyn Law School as well as a Certificate in Journalism from the New York University School of Continuing Education.

Brian was born and raised by his parents in Los Angeles by his parents but he hasn’t revealed any information regarding them. It’s also not known if he has any siblings.

Sullivan is married to Julie Sullivan. The couple tied the knot on July 01, 1995, in Rutherford County, Tennessee. He has kept his family life off the limelight and he rarely posts photos of his wife on social media but on December 3, 2012, a photo of Sullivan and his wife Julie attending a symposium hosted by The Shafik Gabr Foundation.

Brian and his wife have a son together but no information regarding him is available.

Brian joined CNBC in 2011 and currently anchors CNBC’s “Worldwide Exchange” (M-F, 5 AM-6 AM ET), which broadcasts from CNBC Global Headquarters in Englewood Cliffs, N.J. He is also Senior National Correspondent for the network, covering some of the nation’s biggest stories.  He is a frequent guest on the MSNBC program Morning Joe and previously was co-anchor of CNBC’s “Power Lunch”(M-F, 1 PM-3 PM ET).

In his 20 years of financial journalism and television experience, Sullivan has reported from five continents. He has been twice nominated for the prestigious Loeb Award; one for being recognized as among the first financial journalists to highlight the risks of the housing bubble in 2007, and the other for the 2013 CNBC documentary “America’s Gun: The Rise of the AR-15.”

Prior to joining CNBC, he served as an anchor at Fox Business News as well as a producer, reporter and anchor for Bloomberg Television.  and has also appeared on NBC Sports. In 2014 he reported from the Winter Olympics in Sochi, Russia. Sullivan also traded chemical commodities for Mitsubishi International.