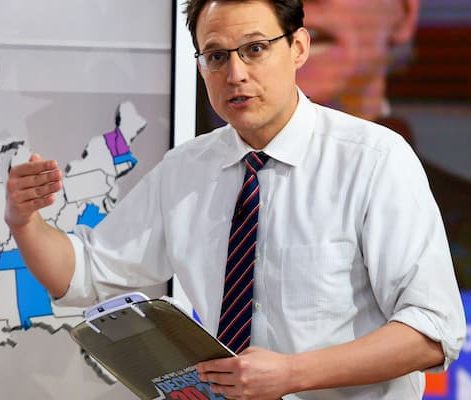 Steve Kornacki is a media personality serving as a national political correspondent for NBC News and MSNBC. He previously hosted “Up with Steve Kornacki” on Saturday and Sunday 8-10 a.m. ET and was a co-host on MSNBC’s ensemble show “The Cycle.”

Where is Steve Kornacki From

He is a native of Groton, Massachusetts.

Kornacki is the son of Stephan Joseph Kornacki and Anne Ramones, of part-Polish. He has an older sister known as Kathryn, who is a professor at Caldwell University.

Dug out an old record player for some late-night music with Mom and Dad. It’s still got the magic touch…

Steve came out as gay in 2011 in an article on Salon. In the article, he said he didn’t realize he was gay until while in sophomore year of high school.

“I was at a basketball game, and the guys around me started pointing out cheerleaders from the other team they thought were hot. I began to wonder: Why wasn’t I looking at the cheerleaders that way? And why was I sometimes noticing the other team’s players instead? My heart rate quickened and my mind spun until a thought surfaced: This is what it means to be gay.”

He added that he didn’t fit the stereotypes of gay men. “I remember seeing drag queens and men dressed in skimpy attire and thinking to myself: Get me out of here so I can watch a baseball game. I just didn’t fit the stereotypes of gay men. I was an ESPN addict as far back as elementary school. I’d also had early crushes on girls. So my epiphany at that basketball game was as sudden as it was incompatible with my self-image. I fought it relentlessly.”

Steve’s marital status is unknown as he likes to keep his personal life private.

He previously hosted the 4 pm hour of MSNBC Live, the Monday edition of “MTP Daily,” “Up with Steve Kornacki” on Saturdays and Sundays 8-10 a.m. ET. He also worked as a co-host on MSNBC’s ensemble show “The Cycle.” Prior to that he wrote for the New York Observer, covered Congress for Roll Call, and was the politics editor for Salon.

Kornacki hosts an NBC News podcast, “Article II: Inside Impeachment.” The podcast is dedicated exclusively to covering the impeachment inquiry.

During a segment with MSNBC host Rachel Maddow, Kornacki standing in front of a screen with the latest vote totals in Arizona said, “our system is updating it as I speak, so I am going to write these numbers.”

As he was speaking, the totals showed Biden’s lead declining from 52.3 percent of the vote to 51.8 percent, while Trump’s share grew from 46.3 percent to 46.8 percent. “There it is. OK, what you just saw was the vote total in Maricopa County, Arizona, [it] just updated. To explain what’s going on here, Maricopa County is about two-thirds of Arizona in terms of population, so this is the motherlode when you’re talking about votes in Arizona.

We have, basically, the third batch of votes, the third and final batch of votes they’re starting to … report out. We call these the late early votes. They were, you know, mailed ballots, absentee ballots that came in sort of after this past weekend or were brought in on Election Day. And the suspense has been would this be a Trump-favorable group, or would it be a Biden-favorable group? So we just got those new numbers.”

Kornacki noted Trump won 43,966 of the new votes compared to 30,322 for Biden. “Donald Trump is getting around 59 percent of these votes,” Kornacki said.

Steve has an estimated net worth of $2 million.

This picture is from four years ago. It was taken in the first apartment I lived in in NYC. I’m sitting next to my friend and old roommate, Brett Wegner. We hadn’t lived there in a long time, but it was vacant and empty and about to be renovated, and we snuck in to take one last look. It was all Brett’s idea. I’m very cautious and he had to talk me into it, as usual. But I’m glad he did because it ended up being a great night filled with old stories and reminiscing, and it makes me happy to think back to it. I’m posting this because Brett just passed away. He was far too young. I hadn’t seen him since March of last year, but I never thought that would be the last time. He had a really good heart. Would talk to anyone and make them feel like they mattered. Just a really great guy, gone way too soon. Rest In peace, Brett.