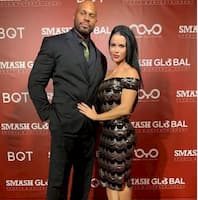 Siliana Gaspard is an American certified trainer and nutritionist and a former fitness model and a competitive bodybuilder. She is the wife of the late former American professional wrestler and actor, Shad Gaspard.

Siliana was born in 1985 in Sofia, Bulgaria.

Siliana holds duo nationality she is an American and a Bulgarian national.

Siliana is a certified trainer and nutritionist. She is the owner of Destination Luxury Fit Retreats where she offers lifestyle coaching, as well as physical training and nutritional advice.

She is a former fitness model and a competitive bodybuilder. She first got into fitness after the birth of her son in 2010.

In July 2011 she competed in her first NPC show, the Branch Warren Classic placing second in her class. She then entered the Dallas Europa 2011 and won Overall Bikini, then went to North American Championships in Cleveland where she placed 3rd. She was crowned the Miss Texas Bikini in 2011.

Siliana’s net worth is unknown but her husband Shad Gaspard had an estimated net worth of $1 million.

Siliana is the wife of Shad Gaspard who was a former American professional wrestler and actor. They got married in 2009. The two met in a bar at Tampa. Siliana had been there to meet a guy she was dating at the time but he never showed up.

Gaspard described their initial meeting as being “a big mess.” Gaspard said, “He asked me to dance to the Grease theme song LOL. I still wasn’t into him, so my friends literally took his phone, put my number in it, did all of the talking for me, meanwhile Shad’s friend was hitting on me…it was a big mess.”

Shad Gaspard died on May 17, 2020 after he drowned while swimming with his son at Marina Del Rey Beach. He went missing on May 17 but his body was spotted by a passerby after being washed ashore on Venice Beach.

Siliana has a son known as Aryeh who was born in 2010.