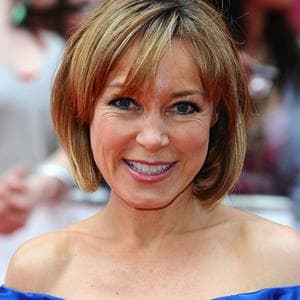 Sian Williams is a Welsh media personality and psychological therapist. She serves as the main anchor on ITN/C5 5 News. She also co-presents Save Money: Good Health alongside Ranj Singh on ITV.

She is of Welsh nationality

Williams is the daughter of John and Katherine Ress. Her mother was a nurse for 40 years but she died in 2009 of liver cancer. Her father was a journalist, working first in print and later in radio.  She said in an interview that when her mother died her father enrolled in a cookery course as he couldn’t cook and didn’t want to buy them ready-meals.

“When my mum died, he couldn’t cook. Instead of buying ready-meals, he enrolled on a cookery course. He enjoyed it so much that he progressed to a Cordon Bleu course. Now he’s doing a degree in modern history. That’s how he tackles life – with a fierce determination and a belief that there’s always something you can learn. I’d like to think that I’ve inherited that philosophy and, at 48, I started a master’s degree in psychology, which I’m just finishing. He is a stickler for grammar and facts. He’d test my brothers and me on history and geography over Sunday lunch. He’d also test us on grammar. For years, I could hear my father saying things such as: “It’s not over 100, it’s more than 100. You must know the difference.”

Sian disclosed that she has twin brothers in an interview. ” I was a tomboy and climbed trees and played Knock Down Ginger with my twin brothers, David and Peter, who are three years younger. We squabbled and fought a lot but are now very close. They’ve inherited my mum’s compassion – one works for the NHS, the other fights for victims of mesothelioma.”

Sian is married to  Paul Woolwich, a TV producer since 2006. She was previously married to Neale Hunt, a former director of advertising firm McCann. The couple got married in February 1991 but they divorced in 2001.

Sian and her husband Paul Woolwich have two children together; a daughter known as Evie and a son known as Seth. She also has two sons from her first marriage to Neale Hunt, Joss and Alex.

In May 2016, Sian revealed that she had undergone a double mastectomy after being diagnosed with breast cancer in 2014,  a week after her 50th birthday. In a candid interview with Woman & Home magazine to publicize her new book, Rise: Surviving And Thriving After Trauma, she said: ‘The week after my 50th birthday I was diagnosed with breast cancer. I thought I was healthy. I did all the right things – I was a green tea drinker, a salmon eater, a runner. So being told I had cancer seemed so improbable that when I went for the results of a biopsy, following a mammogram, I didn’t even ask Paul to come because I just assumed it was routine.’

Williams joined the BBC in 1985 and began working as a reporter and producer for BBC Local Radio stations in Liverpool, Sheffield, Leeds and Manchester. From 1990 to 1997, she was editor for BBC Radio 4’s The World at One and PM programmes. Williams was also a programme editor for a number of news and election specials across Radio 4 and BBC Radio 5 Live.

Prior to the channel’s launch in 1997, Williams joined BBC News 24 as an output editor. During screen tests for potential presenters, one applicant became unwell and Williams was asked to step into the role. Producers were impressed with her performance and they offered her the prime presenting slot of 4:00 pm to 7:00 pm alongside Gavin Esler. She remained with the channel for nearly two years before joining BBC One’s Six O’Clock News in 1999 as Special Correspondent. She became a relief presenter of the bulletin and in 2001 she became its main Friday presenter during Fiona Bruce’s maternity leave. Williams also became a main presenter of the BBC One weekend news bulletins.

Williams joined BBC Breakfast on 12 January 2001 as a relief presenter, initially presenting on Friday–Sunday alongside Darren Jordon, to cover for main presenter, Sarah Montague, and then later with Jeremy Bowen, to cover for Sophie Raworth. She also regularly deputised on both the Six O’clock News and the One O’clock News during this period. In 2004, Williams covered for Raworth on the Six O’clock News during her maternity leave, co-presenting with George Alagiah, and the following year, reported from Sri Lanka and Thailand on the 2004 Indian Ocean earthquake and from Pakistan on the Kashmir earthquake.

In May 2005 she was confirmed as the main female presenter of BBC Breakfast, presenting initially with Dermot Murnaghan and then Bill Turnbull from 2008. Williams left BBC Breakfast on 15 March 2012 after the programme’s production team was relocated to Salford. In 2012 she rejoined BBC Radio 4 to co-present Saturday Live.

Williams has presented programmes outside of news and current affairs including The One Show, Big Welsh Challenge, Now You’re Talking and City Hospital. In 2010, Williams was a reporter for Watchdog. In 2013, she hosted Your Money, Their Tricks with Nicky Campbell and Rebecca Wilcox. Williams also presented a three-part interview series for BBC One Wales titled The Sian Williams Interview featuring Tanni Grey-Thompson, Suzanne Packer and Sian Phillips.

In June 2014, Williams became the new presenter of Sunday Morning Live, BBC One’s religious and ethical debating programme. She presented the programme for two series before stepping down and being replaced by Naga Munchetty in June 2016

Sian became the new main presenter of 5 News in 2015.  She presented her first 5 News bulletin on 4 January 2016. She co-presents Save Money: Good Health alongside Ranj Singh on ITV and ‘Secrets of your Supermarket Food on C5

Outside news, she’s a trained trauma assessor, with an MSc in Psychology and has written a book about recovering after adversity, called ‘Rise: Surviving and Thriving After Trauma.’
She also ran the 2001 New York City Marathon and spent several days recovering in hospital from hyponatremia. After several years of not participating in running, she completed the Virgin London Marathon in 2013 and 2018.

Williams was president of TRIC (Television and Radio Industries Club) for 2008–09 and won the title of Best Presenter in 2012 and 2013. She became an Honorary Fellow of the University of Cardiff in July 2012. and was awarded the title of Doctor of Arts of Oxford Brookes University in 2017 in recognition of her outstanding contribution to the pursuit of academic excellence.

Sian an estimated net worth of $12 million