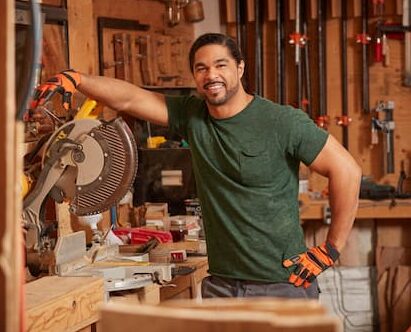 Sebastian James Clovis is an England-born Canadian carpenter and television personality. He is a host of HGTV Canada’s Home To Win. He is a former FL defensive back and played for the Saskatchewan Roughriders and the BC Lions.

He belongs to mixed ethnicity.

He has duo citizenship; Canadian and British. He was born in England but at the age of six, he immigrated to Canada.

He holds a bachelor of arts in Psychology from Saint Mary’s University.

He is the son of Chris (father) and Clare (mother). His father was born in St Lucia and is a high school science teacher while his mother was born in Kenya and is a nurse. He is the eldest of five siblings. His brother Tristan Cloves was a Canadian Football League player for the Saskatchewan Roughriders.

Clovis keeps his personal life private; it is not clear whether he is single or in a relationship.

Sebastian is the principal owner and general contractor of Clovis & Co Contracting. According to his LinkedIn, his roles include negotiating pricing with potential clients, organizing building projects and supervising the building team, securing the correct equipment among other things.

Sebastian Clovis Save My Reno

Sebastian joined HGTV in 2014 as the host of HGTV Canada’s Tackle My Reno which premiered in 2014 and run for one season. The show was relaunched in 2016 as $ave My Reno and is co-hosted by Clovis and Samantha Pynn. In the show, the duo helps homeowners complete needed renovations on a limited budget.

Clovis previously hosted the show alongside Sabrina Smelko but she left after the second season. In her blog, she said she left the show to return to her roots in art, design and branding.

“The truth is that when I found out the show was green-lit to film a third season, I felt uncertain and I couldn’t put my finger on why. As the months passed leading up to the start of production, my uncertainty turned into a pit in my stomach. But it wasn’t until flying back to Ontario and chatting through the details of a quickly approaching start date that I realized I no longer wanted to work on the show.”

He previously hosted Home To Win. He also served as a resident contractor on CTV’s The Marilyn Denis Show.

Sebastian and Samantha are not married they are friends and co-hosts on HGTV’s Save My Reno.

Sebastian is a former Football player. He was drafted by the BC Lions in the 4th round (34th overall) in the 2005 CFL Draft. He spent the entire 2005 season on the Lions’s practice roster. He had 10 special teams tackles during the 2006 season, the year the Lions won their 5th Grey Cup. The Lions traded Clovis to the Winnipeg Blue Bombers in February 2008.

On August 4, 2008, he was signed a contract with the Saskatchewan Roughriders and was placed on their Developmental Squad.

Sebastian has a Shiba named Nahla. He got the Shiba in April 2017 and even filmed their first encounter.

His estimated net worth ranges between $1 million to $5 million.