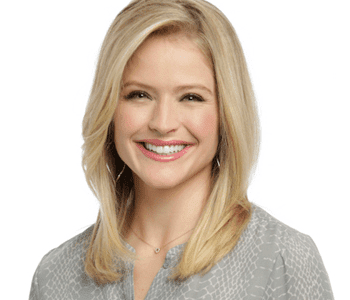 Sara Haines is an American television media personality serving as a co-host of ABC’s The View and also hosts The Chase on ABC. She previously co-hosted Good Morning America alongside Michael Strahan and Keke Palmer.

She graduated from the Smith College in Northampton, Massachusetts with a Bachelor of Arts degree in Government. She played volleyball and basketball for her school team.

She is the daughter of Richard Haines (father) and Sandra Haines(mother). Both of her parents are veterans who served in the US Air Force. They met while on the force and fell in love while still there.

Sara is the second born in a family of four children. Her siblings are sisters, Susanne Haines Sul, Kathy and brother, Joe Haines who is gay.

Sara doesn’t have a twin sister. She has two sisters Susanne Haines Sul and Kathy. Sara and Ginger Zee once wore a similar shirt while on TV and since they are both blonde. Sara joked that they are ‘twinsies’.

Sar is married to Max Shiffrin (Maximillian S. Shifrin) since November 2014. The couple met through a dating app, OKCupid. At the time Sara was on ‘Today’ and a producer suggested she make an online dating profile for a segment and then delete it once it aired. She made a profile with the help of her brother and best friend. After the segment aired, she kept the profile and Max messaged her and they decided to meet. She however canceled when something came up. Max messaged her again asking her out again. Sara tried to coordinate a group date with her brother and his boyfriend. They went for the date but her brother and his boyfriend stayed only for a little while before they left. The couple hit it off and a year later they moved in together and were engaged nine months later.

Max Shiffrin is an American attorney and a litigation partner at BakerHostetler. He represents individuals, small businesses and large institutions in state and federal courts across the country. He provides his clients with the judicious advocacy they need to win at every phase of litigation: on the pleadings, in a discovery dispute, at trial, or on appeal.

During an Instagram session with her fans, she revealed that she wanted to get more kids but she was getting old so they have their children closely spaced.

“We wanted more, and I was older, so we didn’t have the luxury of time to catch our breath. We just stayed in the chaos. Still there…send help.”

She began her career at NBC serving as a production coordinator for ‘Today’. Prior to that, she was a member of NBC’s page program. In May 2009 she joined Today Show as a contributing correspondent alongside Kathie Lee Gifford and Hoda Kotb, a position she held until 2013 to join ABC News.

Sara is the host of The Chase on ABC. The game show consists of the Chasers who seek to outsmart contestants in pursuit of the prize money. The Chasers consist of popular game show contestants through game show television history. James Holzhauer, Ken Jennings, and Brad Rutter compete against contestants after succeeding as ‘Jeopardy!’ players in previous years.

During an interview Sara said;  “This is a trivia show that is all about speed. The first round is where you build your cash. It’s called Cash Builder. You’re trying to raise the money you’re going to fight for. Then you put the money up on the board and go up against the Chasers. If the players manage to outrun the Chasers, they bank money for their teams. If the Chasers beat the players, the players are out of the game.”

Sara has not revealed her political party affiliation but she has described her upbringing as “extremely conservative.” She said her views turned more middle-of-the-road after her college years.

She once replied to a Twitter user who criticized her for saying “good point” to Meghan McCain’s comments on The View.

The user wrote: “And im sick of @sarahaines being on the fence and constantly saying good point @MeghanMcCain.”

Her response: “If you don’t think conservatives can make good points, then you are part of the problem.”

Her actual salary on The View is not public.

Sara has said she lost her baby weight through exercising. During an interview she said; “I always worry about steps in a day. Like, I was joking, we were at a shoot earlier and I’m sitting like this stepping. And they’re like, ‘What are you doing?’ I was like, ‘Getting steps.’”

Sara and Michael  Strahan were co-hosts on Good Morning America. During an interview with Page Six, she said they get along as they have one thing in common, “were all raised the same. We all come from multi-sibling families where you’re taught very young that you’re not the center of this world, so there’s a modesty to all of us, a humility, and mostly there’s a gratitude.”

She added that the first time she met Michael he told her, “I just want to work at a place where I show up and I’m happy to be there and everyone else is, too.”