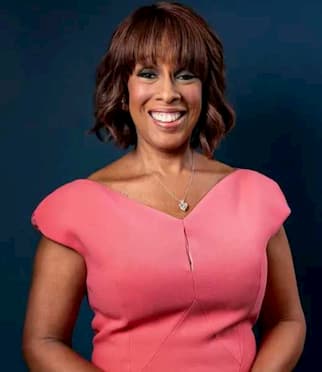 Gayle King  is an American media personality working for CBS News as a  co-host of its flagship morning program, CBS This Morning  and is  also an editor-at-large for O, The Oprah Magazine. She also serves as a now a radio host. Live every Thursday on SiriusXM and previously worked as a special correspondent for The Oprah Winfrey Show and briefly cohosted Cover to Cover, an NBC daytime talk show with Robin Wagner.

She graduated from the University of Maryland with a degree in psychology.

Gayle is the daughter of Scott King  and Peggy King. Her father was an electrical engineer for the federal government while her mother on the other hand was a homemaker.

She was brought up alongside her three sisters whose identity hasn’t been revealed.

Gayle was married to William Bumpus , assistant attorney general in Connecticut in 1982 but 11 years later, in 1993, the two got divorced after Gayle found him in bed with one of her friends and subsequently filed for divorce. She has always been vocal about the fact that her marriage broke apart due to infidelity and on a few different occasions, she has mentioned the events that led to her divorce. In a Vanity Fair Proust Questionnaire, when she was asked who the person she most despised was, she replied with “I’m not a huge fan of the woman who I caught naked with my now ex-husband on June 24, 1990, at 9:16 p.m., but I don’t remember the details.” She explained how she’d been on a trip with her kids, but when the airline changed their flights, they ended up coming back home a day early. “He was not expecting to see me, and I wasn’t expecting to see her,” she said. She also added that she had no suspicion that her now ex-husband had been cheating on her. “They were both nude, by the way, so I even had to see that,” she added. Following this, nothing could make her marriage work with William, not even marital counseling.

Prior to her divorce, she hasn’t opened up about her marital status though she was linked to United States Senator Cory Booker at one point.

Gayle  has two kids, both with her now ex-husband. A daughter Kirby Bumpus, and a son William Bumpus Jr. She shares a lot of posts with and about her children on her social media to show how proud she is of them and even affectionately calls them “favorite daughter” and “favorite son.”,

King faced mounting criticism for her interview with Leslie, an WNBA legend. In the clip, she repeatedly questioned Leslie over Bryant’s 2003 sexual assault case and she insisted it was a short clip of an hours-long interview that covered the former Olympians’ friendship. In a video clip posted to the “CBS This Morning” Twitter account  King asks Leslie if “as a woman, as a WNBA player,” she thinks Bryant’s legacy is “complicated” by the rape charge. Leslie, who was longtime friends with Bryant, responds: “It’s not complicated for me at all.”

Leslie retorted that any journalist, including King, had more than a decade to pose the same questions to Bryant when he was alive, but instead choose to “disrespect” the NBA star’s legacy in death. “I don’t think it’s something we should keep hanging over his legacy,” she said. “It’s time for the media to leave it alone and to back off.”

Throughout his life, Bryant maintained that the sexual contact was consensual. Back then, the charges were dropped when the alleged victim declined to testify, although Bryant publicly apologized and acknowledged that he and the woman’s view of their encounter were different. In 2005, Bryant and his accuser reached a settlement in civil court

Bryant was accused of raping a 19-year-old hotel worker in Colorado in 2003. The basketball star, who married his wife, Vanessa, in 2001, admitted to having sex with the woman but said it was consensual. The case was dropped after the accuser declined to testify. A civil suit was later settled. Many people on social media slammed King, including celebrities such as Snoop Dogg who posted an expletive-laden video to Instagram accusing King of trying to tarnish Bryant’s reputation and telling her to back off “before we come get you.”

Oprah, King’s friend went on to reveal through a twitter post that King has been receiving death threats, and now has to travel with security.

Gayle is co-host of “CBS This Morning.” and interviews top newsmakers and delivers original reporting to “CBS This Morning.” and all CBS News broadcasts and platforms. She is also editor-at-large of the award-winning O, The Oprah Magazine and she recently began hosting a live, six-episode, weekly radio show titled “Gayle King in the House” on SiriusXM.  Since joining CBS News in 2011, King has conducted revealing and news-making interviews with world leaders, political figures and celebrities including an exclusive interview with R&B singer R. Kelly .She  also interviewed  Azriel Clary and Joycelyn Savage, the two young women who lived with him in Chicago at the time. The interviews were made into a CBS primetime special, which was that evening’s No. 1 program in the time slot. King also had the first and only television interview with embattled Virginia Democratic Governor Ralph Northam following his yearbook scandal.

King has handled a number of high-profile assignments, including leading “CBS This Morning”‘s on-the-ground coverage from the Texas border to report on the administration’s “zero-tolerance” immigration policy. She co-anchored live broadcasts from Orlando following the mass shooting at the Pulse nightclub, the Smithsonian’s National Museum of African American History and Culture in Washington D.C. prior to the museum’s opening ,broadcasts from Cleveland and Philadelphia for the 2016 Republican and Democratic Conventions as well as moderating CBS News’ 2020 Democratic Presidential Debate in Charleston.

She also reported from Newtown, Conn. in the aftermath of the Sandy Hook Elementary School shooting in 2012 and co-anchored CBS News’ special coverage of several breaking news stories, including the Paris terrorist attacks, the San Bernardino shootings, and the Supreme Court’s landmark decision to legalize same-sex marriage.

Prior to joining CBS, she also hosted “The Gayle King Show,” a live, weekday television interview program on OWN: The Oprah Winfrey Network, a program that  featured a discussion of a broad variety of topics that included politics and cultural developments, was also broadcast on XM Satellite Radio, where it premiered in 2006. She also served as a news anchor for CBS affiliate WFSB-TV in Hartford, Conn., during which she also hosted her own syndicated daytime program and also worked at several other television stations, including WDAF-TV in Kansas City, Mo., WJZ-TV in Baltimore, Md., and WTOP-TV in Washington, D.C.

King has received numerous awards for her extensive work as a journalist, including three Emmys. In April 2019, she was selected for the TIME 100, Time Magazine’s annual list of the hundred most influential people in the world. She was inducted into the Broadcasting & Cable Hall of Fame in 2018. In 2017 she was a Variety Power of Women honoree, and in 2010 she was honored with both the Individual Achievement Award for Host-Entertainment/Information and the New York Women in Communications’ Matrix Award recipient. She was honored with an Alfred I. duPont-Columbia Award as part of CBS News’ division-wide coverage of the Newtown tragedy. King was honored in 2008 with the American Women in Radio & Television Gracie Award for Outstanding Radio Talk Show.

She earns an annual salary of $5.5 million.

She has an estimated net worth of $40million.