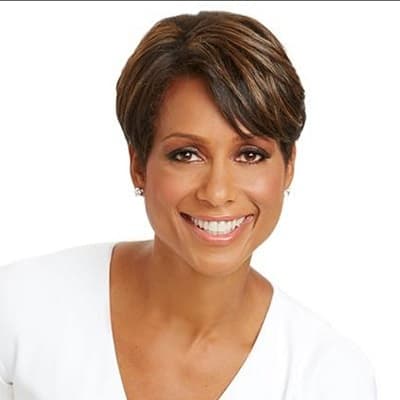 Sade Baderinwa is an American television journalist co-anchoring Eyewitness News with Bill Ritte on weekdays at 5 p.m. and 11 p.m. She has been a news anchor at WABC-TV, the ABC flagship station in New York, since 2003.

Baderinwa earned a bachelor’s degree in agricultural business and resource economics from the University of Maryland, College Park’s College of Agriculture and Natural Resources.

She is a beloved daughter to a Nigerian father and a German mother. When she was seven years old, her mother abandoned her and her father departed to Africa, leaving her in the care of a family friend. She was later adopted by WBAL-TV anchor Edie House in Baltimore, whose parents also offered further support. Baderinwa’s birth mother ultimately brought her in to live with her family in nearby Montgomery County when she was 12 years old. She has maintained contact with both her biological parents and her adoptive family since then.

She is single. She was previously rumored to dating Martin JO Alley. The rumors then subsided as it was not true.

Baderinwa began her work as a production assistant for ABC News’ This Week With David Brinkley, Nightline, World News Tonight, and News One, among other shows. She went on to work as a reporter trainee at WUSA-TV, a CBS affiliate in Washington, D.C., before moving on to WSLS-TV, an NBC affiliate in Roanoke, Virginia, as a reporter. In February 2000, Baderinwa joined WBAL-TV, Baltimore’s NBC station.

Additionally, she hosted a weekly community affairs show as well as anchoring the morning and noon newscasts. Sade started WABC-TV in 2003 as a reporter and anchor for the station’s noon newscast. She then became co-anchor of the station’s 5 p.m. newscast with Diana Williams. Baderinwa was a guest co-host on The View on October 27, 2006. In May 2011, Baderinwa joined Bill Ritter as co-anchor of the 11 p.m. newscast. She replaced Liz Cho, who left to lead the station’s new 4 p.m. newscast, which began when The Oprah Winfrey Show ended. She’s also a regular moderator at the United Nations’ International Women’s Day celebrations.

Baderinwa was struck by a hit-and-run driver on the evening of July 23, 2004. The driver hit her while she ran through police lines while writing a report on local flooding outside of 257 Hudson Street in Hackensack, New Jersey.  She was put unconscious as a result of the crash. After undergoing many surgeries and months of physical treatment, Baderinwa returned on-air on December 13, 2004, but remained receiving physical therapy five times a week following her comeback. The collision’s driver was never apprehended.

Her networth has amassed to approximately $ 5 million.