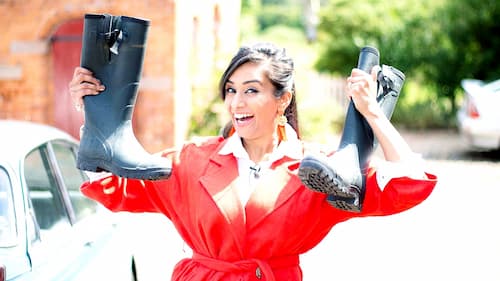 Her actual age is unknown but she celebrates her birthday on January 22.

She is a Scottish national. She was born and raised in Scotland.

She is of South Asian precisely Indian ethnicity.

Roo has not revealed the names of her parents but she said her father died in 2013.

Roo is married to Mark Zakariyya Irvine. The couple got married in October 2012. They both worked in marketing before pivoting to antiques dealing.

Mark is a consultant on various sectors and also an executive director of Jaxx UK Ltd, a company he joined in 2006 as a managing director. He is also the owner of Busting Clouds, where he offers freelance consultancy. He also serves as the director of investor relations for UK Pillar Ltd.

As of 2021 Roo has no children but she has two Maine Coon cats.

Roo is the owner of Kilcreggan Antiques, an antique shop, located on the shores of the Clyde estuary in the village of Kilcreggan. They sell Art, Silver & Silverware, Brass, Crystal, Glass, Militaria, Naval, Curious, China, Jewellery, Antique Weaponry, Furniture, Oriental, African, Wood Carving, Vintage perfumes/make up/ scarves and much more.

On her website, she revealed that the shop came about quite by bad luck after her father died and she was heartbroken and devasted. Three weeks later her father-in-law also died after a long battle with cancer. Together with her husband, they both walked away from their senior corporate jobs and focused on taking care of their widowed mothers. Since has always loved antiques and had a keen eye her husband suggested they ‘go for it.’

Irvine is one of the experts on BBC’s Bargain Hunt. She joined the show in early 2019. She was approached by the Bargain Hunt team and was glad to join the show.

“I had been on Antiques Roadtrip for 2 years when I was approached by the BH Team and asked if I’d like to get on board. It didn’t take me long to think about it! Both shows are so different in terms of the daily routine, but brilliant to work on in their own right.”

She appeared on ‘Flipping Profit’, which rain in April 2018 as one of the regular experts completing four of the 20-episodes in the series.

“FP was a cool concept asking experts to put up their own money, competing against market traders and up-cyclers to make the most money for charity.”