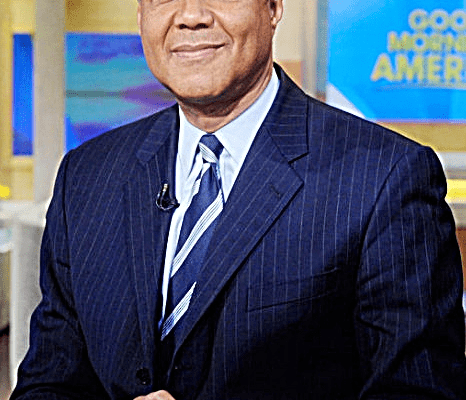 Ron Claiborne is a retired American journalist and correspondent for ABC News. He was the “more news reporter” for the weekend edition of Good Morning America, anchored by Dan Harris and Paula Faris.

He attended and graduated from Yale University with a B.A. in psychology and a master’s degree from the Columbia University  School of Journalism.

His father’s name was Earl Claiborne, a Navy shipyard. He passed on in September 1995. His mother worked in an informal child daycare service on Percy Street. He is very close to his mother, who is 89 years old currently, however her name is unknown.

He has two brothers, whose names are unknown.

He has never been married.

He has no children.

He is the news anchor for ABC News’ weekend edition of “Good Morning America.” Claiborne joined ABC News in 1986. In addition to his news anchor duties, he is a general assignment correspondent based in New York, reporting for “World News with Diane Sawyer” and “Good Morning America.” He has previously worked in the New York, Los Angeles, Chicago, Miami and Boston bureaus of ABC News.
In 2007 and 2008, he covered the presidential campaign of Sen. John McCain. He has also covered such stories as the Catholic Church sex abuse scandal in 2002 and 2003, the Elian Gonzalez custody case in Miami in 1999 to 2000, the Yugoslavia conflict in Belgrade in 1999, the 2000 Bush presidential campaign, the 1992 Clinton presidential campaign and the 1991 Persian Gulf War.
He was part of the ABC News team that won a 2000 Emmy Award for coverage of the seizure of Elian Gonzalez in Miami.
Prior to joining ABC News, he was a general assignment correspondent for WNYW-TV, New York from 1982 to 1986. He was a reporter for the New York Daily News from 1980 to 1982 and a reporter and national editor for United Press International in New York, from 1977 until 1980.

Many people were concerned when he first broke the news about his retirement and some of them even thought that he was ill or he had cancer. Ron is perfectly fine and is retiring.

His salary is undisclosed.

His estimated net worth is $5 million.