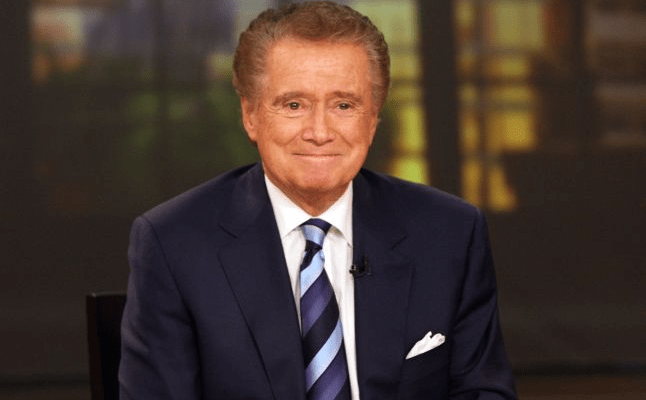 Regis Philbin was an American television presenter, talk show host, game show host, actor and singer. He was once called “the hardest working man in show business”, he holds the Guinness World Record for the most hours on U.S. television.

He attended Our Lady of Solace grammar school and graduated from Cardinal Hayes High School before attending the University of Notre Dame, from which he graduated in 1953 with a degree in sociology.

His father, Francis “Frank” Philbin, was a U.S. Marine of Irish descent who served in the Pacific. His mother, Filomena (“Florence”; née Bashia), was a member of an Albanian-Italian immigrant family from Greece. He was supposedly named “Regis” because his father wanted him to attend his alma mater, the prestigious Regis High School.

It was long believed that he was an only child, but he announced on Live with Regis and Kelly in February 2007 that he had a brother named Frank (March 1, 1951 – January 27, 2007), who had died from non-Hodgkin lymphoma several days earlier. Philbin said his brother had asked not to be mentioned on television or in the press while still alive to protect his privacy.

He was married to Catherine Faylen, the daughter of actor Frank Faylen, from 1955 to 1968 and divorced. He again married interior decorator Joy Senese in 1970. On live, he often mentioned Joy, and to a lesser degree his children.

He had a daughter named Amy and a son named Daniel with his first wife, Catherine Faylen. Philbin had two daughters also named Joanna and J. J. Senese with his second wife, Joy Senese. In total he had four kids.

He was host of the prime-time game show, “Who Wants to Be a Millionaire,” briefly television’s most popular show at the turn of the century. ABC aired the family-friendly program as often as five times a week. It generated around $1 billion in revenue in its first two years. ABC had said it was the more profitable show in TV history.
In 2008, he returned briefly to the quiz show format with “Million Dollar Password.” He also picked up the Lifetime Achievement Award from the daytime Emmys.
After leaving the Navy in 1955, Philbin talked his way into a meeting with the stationmaster at KCOP-TV in Los Angeles. He got a job parking cars, then progressed into work as a stagehand, courier, news writer and producer of a sports telecast. When its sportscaster didn’t show up one day, Philbin filled in.
Philbin got far more on-air experience in San Diego in the early 1960s, when KOGO-TV began producing “The Regis Philbin Show” for a national audience. The program of music and celebrity interviews was taped two weeks before each airing. It was canceled after four months.
In 1967, he was hired as the announcer and sidekick to comic Joey Bishop on his network show. When he heard that he was going to be fired because of poor ratings, Philbin tearfully announced he was leaving on July 12, 1968, walking off during a live broadcast. He returned three days later after letters of support poured in.
Philbin enjoyed a side career as a singer that began when he sang “Pennies from Heaven” to Bing Crosby on Bishop’s show. He said a record company called him the next day, and he made an album.

Even though the series “Regis Philbin’s Health Styles,” on Lifetime in the 1980s, was part of his lengthy resume, Philbin had health issues. Doctors performed an angioplasty to relieve a blocked artery in 1993. He also underwent bypass surgery in 2007 at age 75.

He died on July 24, 2020, at the age of 88. His reported cause of death was heart attack due to coronary artery disease. A funeral service was held at the Basilica of the Sacred Heart in Notre Dame, Indiana. He was laid to rest in Cedar Grove Cemetery, located on the campus of the University of Notre Dame.

He reportedly made an annual salary of $20 million.

He had an estimated net worth of $150 million.