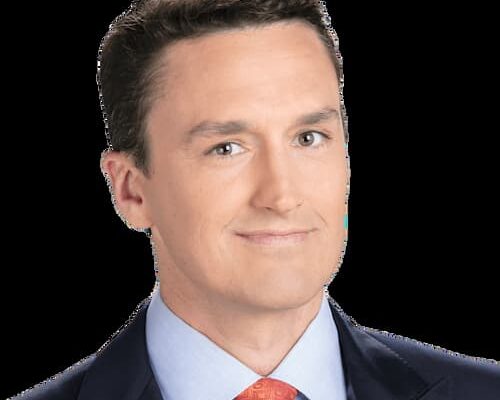 Rhett Lewis is an American media personality serving as an NFL Network host. He hosts Path to the Draft and can also be seen on NFL Now, NFL Total Access. He previously worked as an anchor and reporter at WHDH in Boston.

He attended Indiana University in Bloomington graduating with a B.S. in Sports Broadcasting followed with a M.S. in Sports Administration. While at the University he played wide receiver on the football team from 2001-2005.

He is the son of Marlene and Dean Kleinschmidt. His father served as a student trainer on Indiana’s only Rose Bowl team in 1967 and returned to the sideline for the Hoosiers in 2004 as the head trainer. He has one sister.

Lewis is married to Kayna Whitworth since May 15, 2015. She is a journalist serving as an ABC News correspondent based in LA and is a regular contributor on Good Morning America and World News Tonight with David Muir.

Rhett is a father of two boys; Conway and Wylder.

He played football as a wide receiver for the Hoosiers. He redshirted his freshman year in 2001. During the 2002 season, he played in six games and made one catch as a freshman, gaining 13 yards against Michigan State. During the 2003 season, he played in six games with no receptions. In 2004 he played in all 11 games and served as a holder n field goal and PAT attempts. He corralled one ball for eight yards at Illinois and had a pair of catches for 14 yards at Penn State. He tied his career-high with two catches each against Minnesota and Michigan, and he posted career-highs in receiving yards (28) and career-long reception (23) against the Wolverines.

Lewis is an NFL Network host. He is the host of NFL Network’s Path to the Draft and can been seen on NFL Now and NFL Total Access.

He began his career in journalism as an intern for WISH-TV in Indianapolis, under the wing of veteran sports anchor Anthony Calhoun. This helped him compile a portfolio of coverage of Pacers, Fever and Indianapolis Motor Speedway events.

He later joined KLBK, CBS affiliate in Lubbock, Texas as a sports director. The move placed him into coverage of iconic firebrand Texas Tech coaches Mike Leach (football) and former IU coach Bob Knight (basketball), as well as the Big 12 Conference. In 2008 due to the Great Recession he lost his job and moved back to New Orleans.

He later got a job as a producer for WVUE, FOX affiliate in New Orleans. He later joined WHDH in Boston as an anchor and reporter. In his five year tenure he covered all four major pro championships (Super Bowl, NBA Finals, World Series and Stanley Cup Final), and five championships in total.