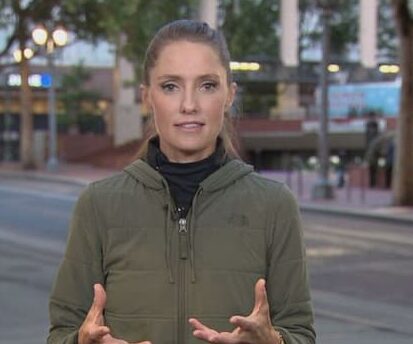 Kayna Whitworth (born; Kayna Logan Whitworth) is an American media personality serving as an ABC News Correspondent based in Los AngeleS. She is a regular contributor on Good Morning America and World News Tonight with David Muir.

She holds a Bachelor’s degree in communication and media studies from Colorado State University.

Kayna is the daughter of Rocky and Mary Whitworth. She has a younger brother known as Kallen.

She is married to Rhett Lewis since May 15, 2015 is a journalist serving as an NFL Network host. He appears on various programs such as NFL Now, NFL Total Access and Path to the Draft. Prior to joining NFL he was an anchor and reporter at WHDH in Boston.

Kayna is a mother of two boys; Conway and Wylder.

Kayna is an ABC News Correspondent based in Los Amgeles who can regularly be seen on Good Morning America and World News Tonight with David Muir. Prior to joining ABC News she was a morning anchor for KOLD News 13 (CBS). While there she also filled in as an anchor and reporter for FOX 11 Tucson Now Daybreak. She previously anchored and reported for KBOI morning show.