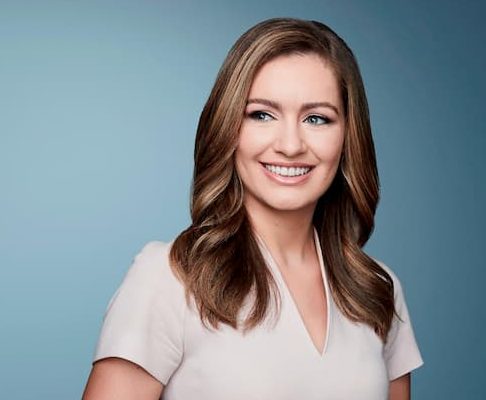 Rebecca Buck whose birth name is Rebecca Genelle Berg is an American media personality serving as a political reporter for CNN, she previously served as a political analyst.

Buck stands at a height of 5 feet 7 inches tall.

Buck graduated from the University of Missouri with a Bachelor’s Degree in Journalism and Political Science.

Rebecca is the daughter of Kristi M. Gomez and Steven I. Berg who were both real estate brokers by profession and the owners of San Diego Castles Realty in Poway, California. Steven died in 2013 while her mother remarried to Manuel B. Gomez. She has a sister known as Emily.

Rebecca married Brendan Kelley Buck on November 17, 2018 at the Inn at Little Washington in Washington. He is the chief communications adviser to Representative Paul D. Ryan, the House speaker. He is also a partner to Blue Engine Message & Media and JDA Frontline, a communications solutions company.

The couple met in 2013 in a basement hallway of the United States Capitol when Rebecca was a congressional reporter at BuzzFeed and Buck was a press secretary for the House speaker at the time, John A. Boehner. She said she paused long enough to introduce herself to the press secretary who strode by in a gray suit and cowboy boots. A few weeks later she asked him out professionally, and they grabbed drinks at the Tune Inn, a bar on Capitol Hill.

Rebecca joined CNN in July 2016 as a political analyst in 2017 she became a political reporter based in Washington, D.C., reporting on the 2020 presidential campaign. She previously served as a national political reporter for RealClearPolitics (April 2015 – September 2017). She worked as a Capitol Hill reporter for Buzzfeed from September 2012 to April 2013. She also worked as Political Reporting Fellow for the New York Times in the summer of 2012.

Rebecca interned for different stations from 2011 to 2012: she was an intern at the St Louis Post-Dispatch, The New Yorker, and New York Magazine. She was also an intern at the San Diego office of Senator Dianne Feinstein.

This selfie gets its own post so that the historical record may reflect: at least once during the Corona Quarantine of 2020, I got dressed and did my hair