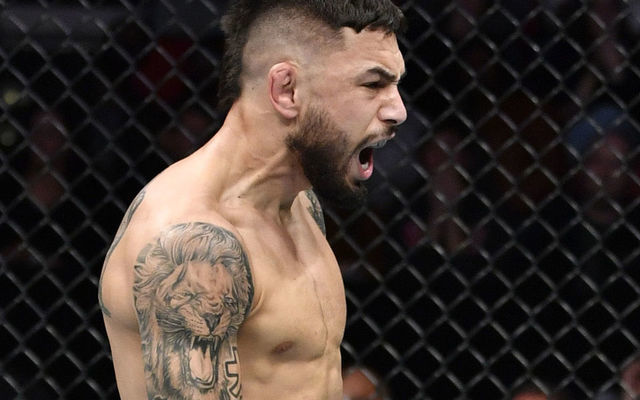 Alex Perez is an American mixed martial artist and currently competes in flyweight division of the Ultimate Fighting Championship (UFC). As of June 16, 2020, he is #4 in the UFC flyweight rankings.

He represent West Hills College Lemoore in wrestling and he was the regional champion and All-American wrestler in his sophomore year in college.

Information about his parents is not available to the public.

He has two brothers Silverio Esparza and Julian Perez.

He has kept his personal life out of the limelight and so its not clear whether he is married or not.

He fought all of his fights in United States where he made his professional debut on May 6, 2011 at TPF 9. He faced Jesus Castro and knockout Castro in round one. He amassed a total of 16-4 before joining Dana White’s Tuesday Night Contender Series Season 1, Episode 5, facing Kevin Gray. He defeated Gray, and with the win, he was signed by UFC.
He made his promotional debut on December 9, 2017 at UFC Fight Night: Swanson vs. Ortega against Carlos John de Tomas. He won the fight via submission in round two.
On February 24, 2018, he faced Eric Shelton at UFC on Fox: Emmett vs. Stephens. At the weigh-ins, he weighed in at 126.5 pounds, a half pound over the flyweight non-title fight upper limit of 126 pounds. As a result, the bout proceeded at catchweight and Perez was fined 20% of his purse which went to his opponent Eric Shelton. He won the fight via unanimous decision.
He faced Jose Torres on August 9, 2018 at UFC 227. He won the fight via knockout in round one.
Perez faced Joseph Benavidez on November 30, 2018 at The Ultimate Fighter 28 Finale. He lost the fight via technical knockout out in round one.
Perez faced Mark De La Rosa in a bantamweight bout on March 30, 2019 at UFC on ESPN 2. He won the fight via unanimous decision.
He was scheduled to face Sergio Pettis on September 21, 2019 at UFC on ESPN+ 17. However, Perez pulled out of the bout on August 26 citing an injury.
Perez faced Jordan Espinosa on January 25, 2020 at UFC Fight Night 166. He won the fight via an arm-triangle choke in round one. This win earned him the Performance of the Night award. Perez’s arm triangle was an on the fly adjustment and the first time he had submitted someone from that position.
He was expected to face Kai Kara-France on May 16, 2020. However, on April 9, Dana White, the president of UFC announced that this event was postponed to a future date due to COVID-19 pandemic. Instead Perez faced Jussier Formiga on June 6, 2020 at UFC 250. He won the bout via first-round technical knockout. This win earned him the Performance of the Night.
Perez was expected to face Brandon Moreno on November 21, 2020 at UFC 255. However, on October 2, it was announced that Perez would face Deiveson Figueredo, replacing an injured Cody Garbrandt for the UFC Flyweight Championship at the same event. He lost the fight via guillotine choke submission in round one.

His next fight will be announced later.

He hasn’t revealed his salary to the public.

His net worth is $3 million.