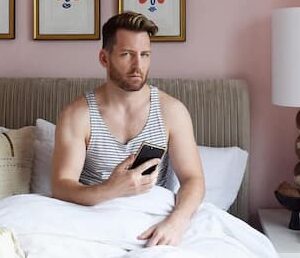 Orlando Dumond Soria is an interior designer, television personality and author. He is the host of HGTV’s series Build Me Up he previously hosted Unspouse My House.

He is a white Latino. His father is Mexican while his mother is English. According to a blog he wrote, he alleged that since his family has been in California for like 5 generations on both sides he doesn’t care identifying with either side of the background.

” Not that I don’t appreciate Mexican culture or Euro culture, I just don’t really feel a part of it. Like a lot of people, I just identify with where I live (California) first, American second, and as a Raging Homosexual third.”

He graduated from Cornell University’s College of Architecture, Art and Planning and later from the University of Pennsylvania’s School of Design.

He is the son of Dale Soria and Catherine Soria. His father was a dentist by profession, and his mother was a tutor. He has three siblings; a brother known as Miguel Soria and two sisters Elisa Catala Soria and Kelly Colvin Soria.

Soria has no wife, he identifies as a homosexual.

Orlando is in a relationship with Joey Giorgianni. He is a Los Angeles based freelance private chef specializing in Italian Cuisine.

Soria is a designer who worked on Emily Henderson’s HGTV show “Secrets From a Stylist” as a design assistant. He also worked as a production designer for Fine Young Man Productions. He has also worked as an art director for ODD Entertainment, Slow Donkey Productions, The Walt Disney Company and Present Pictures

Orlando Soria Build Me Up

Orlando is the host of HGTV’s Build Me Up. In the show, he helps renovate homes for clients going through a major life change. Prior to hosting Build Me Up, he hosted ‘Unspouse My House’ also on HGTV, which followed him as he helped various heartbreak victims get through the breakup through interior design. Unlike Unspouse which helped clients get over a bad breakup, Build Me Up covers a wider range of trauma.

The inspiration behind the show was his own personal life. He had gone through a breakup and soon after moving into an expensive apartment, he lost his job at the now-defunct design platform Homepolish. Designing his new home, however, brought him joy and he thought about a way to pay that joy forward.