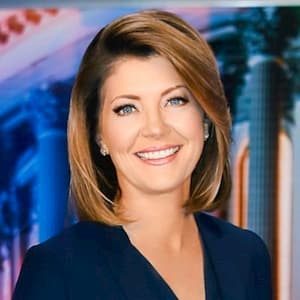 Norah attended Douglas MacArthur High School  and  holds a Bachelor of Arts in philosophy and a master’s degree in liberal studies from Georgetown University.

O’Donnell is the daughter of Francis O’Donnell and  Norah Sr O’Donnell. Her father worked as a Military Physician and was also a US Army officer who completed a residency at Johns Hopkins University in Baltimore and worked for a year in preventive medicine at Walter Reed Army Medical Center in Bethesda, Maryland, before being transferred to serve as Chief of Preventive Medicine in an army hospital in Germany.

The year 2002 marked thirty years of service and his mandatory retirement as a colonel, but Francis continued to work as a contractor for the Armed Forces Health Surveillance Center. Subsequent postings took him and his family to Seoul, South Korea, San Antonio, Texas and included his year-long deployment to Saudi Arabia during the Persian Gulf War and ultimately back to Walter Reed. Her mother at the age of 67,  returned to school to study microbiology and both of her parents are both of Irish descent.

Norah was brought up alongside her sister Mary and brothers Frank and Matthew.  Mary is a military physician just like her dad and she graduated from the Army’s medical school, Uniformed Services University of Health Sciences, and  deed her internship and residency in general surgery at Walter Reed Army Medical Center.  Frank, graduated from Harvard and works as the vice president of engineering at PubMatic while  Matthew tutors high school students.

She is married to Geoff Tracy , a restaurateur who graduated from  Georgetown University and the Culinary Institute of America. After his graduation, he opened his first restaurant, “Chef Geoff’s,” in 2000, when he was only 27 years old. Two years afterward, he opened his second restaurant, “Chef Geoff’s Downtown,” in 2002. He has followed that with several other restaurants. Norah and Geoff  met while attending Georgetown together. He spotted her the first time when he saw her and her roommate in a cafeteria line. The two started dating and they were together when  Tracy opened his first restaurant in 2000 and helped him paint the walls. She also collaborated with him to author the bestselling cookbook, “Baby Love: Healthy, Easy, Delicious Meals for Your Baby and Toddler.”

O’Donnell and her husband has three children together, a set of twins of twins named Grace and Henry born May 20, 2007 and a daughter Riley Norah Tracy, was born on July 5, 2008.  O’Donnell noted that her daughter’s first name had been suggested by Tim Russert, who died three weeks prior to Riley’s birth.

In 2016 , Norah was diagnosed with melanoma a type of skin cancer but it was discovered during the early stages. It was in the epidermis, the most superficial layer of skin and  noninvasive in that it had not yet reached deeper into the dermis, where there are blood and lymph vessels through which cancer cells can spread  to the rest of the body. It was technically Stage 0 cancer. skin cancer. She had the  cancer removed and the doctor had to cut a three-inch-long piece of skin from the upper left corner of her back. The incision required 25 stitches to close She revealed the news of her diagnosis and recovery in March 2017, in the hopes of helping others avoid the same experience. Now, as a skin cancer survivor, O’Donnell gets a check every six months, and has upped her skin protection methods.
In March 22, 2019 she underwent an  emergency surgery at the Medical University of South Carolina in Charleston to have her appendix removed which was successful.

Since joining CBS, she has served as anchor in several of its highest-rated shows, filling in for Scott Pelley on the CBS Evening News multiple times, the first being October 10, 2011. She was chief White House correspondent in 2011 and 2012, and became a co-anchor on CBS This Morning in fall of 2012. On May 6, 2019, Susan Zirinsky, president of CBS News, announced that O’Donnell had been named anchor and managing editor of the CBS Evening News beginning on July 15 and will also be the lead anchor of political events for the network and continue as a contributing correspondent for 60 Minutes. She becomes the third woman after Connie Chung and Katie Couric to serve as the program’s weeknight anchor. Her last broadcast of CBS This Morning was on May 16, 2019.

Prior to working for CBS, she worked as a staff writer for Roll Call, where she covered Congress and also spent  twelve years of her career at the NBC networks as a commentator for the Today Show, Chief Washington Correspondent for MSNBC, and a White House correspondent . O’Donnell was also a contributing anchor for MSNBC Live and an anchor on Weekend Today and  reported for various NBC News broadcasts, including NBC Nightly News, The Today Show, Dateline NBC, and MSNBC and also  filled in for Chris Matthews as host of Hardball with Chris Matthews and was a regular pundit for The Chris Matthews Show.

Washingtonian Magazine has named O’Donnell as one of Washington’s 100 most powerful women. O’Donnell has also been named to Irish American Magazine’s 2000 “Top 100 Irish Americans” list. She also  won the Sigma Delta Chi Award for Breaking News Coverage for the Dateline NBC story “DC In Crisis,” which aired on the night of September 11, 2001 and  won an Emmy as part of NBC News’ Election Night coverage team in 2008 for the category Outstanding Live Coverage of a Breaking News Story – Long For and was also awarded an Emmy in 2018 for her six-month investigation and report on “Sexual Assault in the Air Force Academy” for CBS This Morning in the category Outstanding Investigative Report in a Newscast. That same year, this story was given an honorable mention from the White House Correspondents’ Association for the Edgar Allan Poe Award.

She earns an annual salary of $7million-$8million.

She has an estimated net worth of $18million.