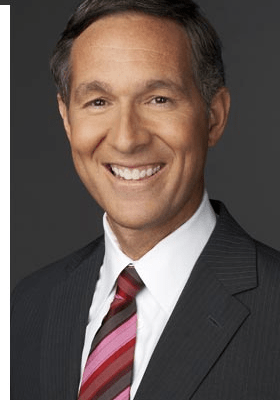 Gary Tuchman is CNN national correspondent based in Atlanta, having joined the network in 1990. He is a staff correspondent for the Anderson Cooper 360 program.

He was born in 1961 and his exact birthday is not disclosed.

He earned a Bachelor of Science degree in broadcast journalism from Boston University. In 2003, the university honored him with its Distinguished Alumni Award.

His father, Ronald E. Tuchman, was CEO of Child World which was the 2nd largest toy store in the US at the time while his mother’s identity is undisclosed.

He married Katherine M. Stark in 1990, in a Jewish ceremony at the Waldorf-Astoria in Manhattan. His wife, Katherine, runs a restaurant.

Tuchman together with his wife Katherine is blessed with three children, daughters; Lindsay, 30, and Sammy, 23, and a son, Daniel. Lindsay Tuchman is a CNN correspondent and an anchor/reporter for Spectrum News in New York.

He is  CNN national correspondent based in Atlanta, having joined the network in 1990. He is a staff correspondent for the Anderson Cooper 360 program.
Tuchman’s reporting contributed to two 2011 Emmy Awards for AC 360’s Haiti earthquake coverage. He was nominated for a 2010 Emmy award for his reporting of a scandal in Texas in which police officers steal from minority motorists. His reporting also contributed to a 2010 George Foster Peabody Award for coverage of the Gulf Oil Spill; a 2009 Peabody Award for coverage of the Presidential Primary contests, a 2005 Peabody Award for Hurricane Katrina coverage, and a 1996 Emmy Award for the coverage of the Oklahoma City bombing.
Before joining CNN, he worked for five years as an anchor and reporter at WPEC-TV, the CBS affiliate in West Palm Beach, Fla., where he specialized in political reporting. While at WPEC-TV, he did a series on the Intifada from the Gaza Strip and West Bank and received an Emmy Award nomination for the series. Before working at WPEC-TV, he served as the primary anchor and reporter for WBOC-TV, the CBS affiliate in Salisbury, Md. he received several Associated Press awards while at WPEC-TV for excellence in documentary, enterprise and spot news reporting.

His exact net worth is undisclosed but it’s speculated to be at millions of dollars.