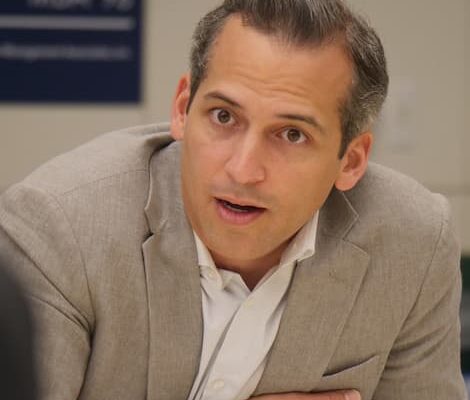 Nick Schifrin (Nicholas Solomon Simon Schifrin) is an American media personality working as the foreign affairs and defense correspondent for PBS NewsHour, based in Washington, D.C.

Nick is an American national.

He earned a bachelor’s degree of Arts in U.S. History from Columbia University and a master’s in International Relations from the Johns Hopkins School of Advanced International Studies (SAIS), where he graduated with distinction.

He belongs to white ethnicity.

Nick has not revealed the name of his parents but he shares their photos on his social media accounts.

#happyfathersday to my dad, who was 41 when he took the top photo. Today is my first #fathersday as a dad, and I am almost exactly my father’s age when he held me. We both agree he wore the beard better. I can only hope I hold my son in the many ways my father has always held me pic.twitter.com/lW6Rx53YgK

Schifrin is married to Camilla Schick since 2019. The couple met in 2014, when they were both working in Jerusalem. Eight months after a long-distance relationship, Schick moved to the U.S. and settled in D.C. to be with Schifrin. In May 2019, they were on a trip to Paris where Schifrin proposed.

Camilla Schick is a journalist working as a foreign affairs producer for CBS News. She has worked as video journalist and breaking news producer for The New York Times in London. and a freelance producer and journalist for BBC. She has freelanced in Tel Aviv for BBC, Al Jazeera, Deutsche Welle, and others.

Nick has a son known as Noah Anthony Rudy Schifrin born on April 18, 2021.

Noah Anthony Rudy Schifrin joined the world on Sunday April 18, 2021, weighing 7 lbs, 12 oz. The parents are adjusting to sleeplessness and a love with which we were unfamiliar. Noah seems blissfully unaware of such things and is growing every day. pic.twitter.com/wFmc3vo0vW

Nick was awarded the American Academy of Diplomacy’s Arthur Ross Media Award for Distinguished Reporting and Analysis of Foreign Affairs in November 2020.

He previously worked as Al Jazeera America’s Middle East correspondent. During his tenure, he covered the 2014 war in Gaza; reported on the Syrian war from Syria’s Turkish, Lebanese and Jordanian borders; and covered the annexation of Crimea. He won an Overseas Press Club award for his Gaza coverage and a National Headliners Award for his Ukraine coverage.

He also served as the ABC News correspondent in Afghanistan and Pakistan from 2008 to 2012. In March 2012 he became a foreign correspondent based in London where he reported across Europe and Northern Africa.

In 2011 he was one of the first journalists to arrive in Abbottabad, Pakistan, after Osama bin Laden’s death and delivered one of the year’s biggest exclusives: the first video from inside bin Laden’s compound. His reporting helped ABC News win an Edward R. Murrow award for its bin Laden coverage.