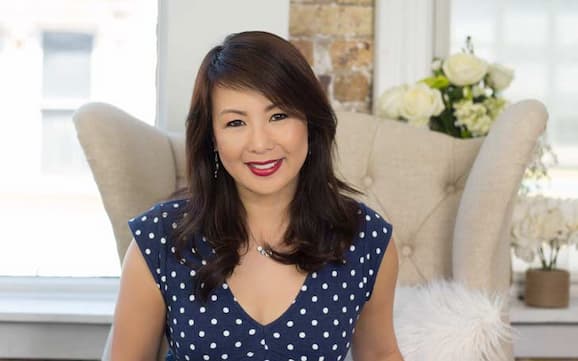 Nancy Loo is the West Coast Bureau Correspondent for NewsNation. She is an Emmy Award-winning journalist, and  a former reporter and fill-in anchor at WGN-TV.

Loo was born in 1964, in Hong Kong but raised in Northern California, U.S

Her standing height is not yet disclosed.

She has not released any names about her parents yet but she does not hesitate to post them regularly on her social media.

She is happily married to her loving and caring husband Brian Jenkins. She met her husband in the Philippines while she was covering a coup attempt news against Corazon Aquino.

She is s a beloved mother of two, a son Connor who has graduated with dual degrees in International Business and a daughter whose name is not yet released.

Loo’s first broadcasting employment was with TVB Pearl, a Hong Kong-based English-language station, after graduating from the University of Oregon School of Journalism. Loo worked as an anchor and went extensively to the Philippines, Taiwan, and Thailand to cover news. She later worked for ABC Radio as a freelance reporter, covering important news events in South Korea, North Korea, and Japan. Before relocating to New York City in 1989, she also hosted an English-language newscast on Japan Cable TV.

Additionally, in 1989 and 1990, Loo worked as a freelance television reporter for News 12 Long Island. She joined NY1 (New York One), Time Warner’s all-news cable channel for New York City, as one of the first “video journalists” in 1992.
Loo covered the health beat as a VJ, working as a videographer and performing stand-up routines in front of the camera.

Along with that, she worked as a fill-in anchor, winning the Women in Cable National Anchor of the Year Award for anchoring nonstop from 4:00 p.m. to 1:15 a.m. on the day of the 1993 World Trade Center bombing. The bomb took out the rooftop antennae that broadcast signals for other New York City television stations. NY1 was the only local news station that stayed “on the air” that day.

Moreover, Loo was hired as a general assignment reporter by WABC-TV, the ABC station group’s flagship, in 1994.  She eventually created an on-set daily health news feature for her on the early morning program. In early 1996, she spent a week in London filming medical reports.

In addition to that, Loo  was promoted to co-anchor the morning and midday newscasts a few months later. She went into labor during a morning newscast in March 1997, but finished the show before driving herself to a Westchester County hospital, where she gave birth to her second child.

Loo began working for WGN-TV in Chicago, Illinois, as a primary reporter on the morning and lunchtime newscasts on June 1, 2010. She covered the morning, midday, and weekend newscasts as an anchor. She also covered special features for the afternoon and evening newscasts on a regular basis.

She has amassed a networth of approximately  $1 million – $1.5 million.