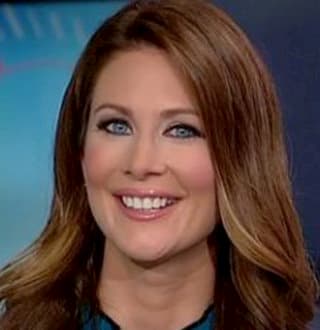 She was born on 31 January 1977 in West Virginia, United States.

Molly attended Tucker County High School, Hambleton, West Virginia before joining  college at Virginia Tech where she graduated with  a Bachelor of Arts degree  in Mass Communication and Political Science.

No information about her parents is available. It’s also not known if she has any siblings.

Molly is married to Matt Petrus . The two apparently met and started dating while they both attended Virginia Tech and she became engaged in June 9, 2011. The duo later exchanged their marriage vows  at Jackson Community Church, Jackson, New Hampshire on July 21, 2012 .

Molly and her husband has a daughter Maryn who was born in August 13, 2016.

Molly  joined Fox News Channel in January 2006 as a Boston-based correspondent. During her tenure at FNC, she  has covered several breaking news stories and events, including major political elections, immigration and national security . Line reported from the scene in Boston while the tragic marathon bombing news unfolded. She also reported live from the tragic shooting at Sandy Hook Elementary School in Newtown, Connecticut. She has also covered the Cartoon Network Aqua Teen Hunger Force scandal and the arrest and extradition of Neil Entwistle, the British born man accused of murdering his wife and baby.  Line also provided the latest election news from Maine during FNC’s Democracy 2020 election coverage. She has also appeared in other programs including  The O’Reilly Factor, America Live, Fox and Friends and The Five.

Prior to joining FNC, Line worked as an anchor and reporter for WFXT-TV (FOX 25) in Boston, Massachusetts and WXXA-TV (FOX 23) in Albany, New York. While at the local affiliate in Boston, Line covered the sentencing of the shoe bomber Richard Reid and the Station Nightclub Fire, a disaster that killed nearly 100 people.

Molly’s  career in journalism started in 1999 at WDTV, a CBS-affiliated channel where she worked as a photographer and reporter in Bridgeport, West Virginia. She worked there for a year.

Line is an actress, known for My Last Five Girlfriends which she played the role of “Divine Dating Angel” (2009), Stossel (2009) and The Real Story with Gretchen Carlson in 2013.

She has an estimated net worth of $2.5million.