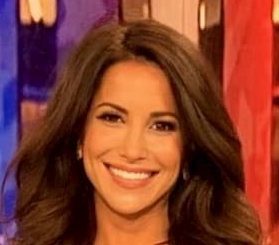 Gigi Stone Woods is an American media personality working as a freelance TV news anchor for national news programs on NBC News and MSNBC and is the host and co-producer of Hiring America, a nationally syndicated business TV show.  She previously worked at CBS News as an anchor for “CBS Moneywatch” and a business correspondent for “CBS This Morning.

Stone attended the Nightingale-Bamford School, and the Trinity School in New York City and learned to speak French and Spanish. Stone received a master’s degree from Columbia University’s Graduate School of Journalism, where she won the John M. Patterson Prize for Best Television documentary. Stone volunteered in a Peace Corps-style program in South America, and is a graduate of the Outward Bound training school

Stone hasn’t revealed  much information about her parents but in a question and answer interview, she said, ” I grew up alone with my mother and never got the chance to know my father. As a result, my mother and I have a wonderful and close relationship”. It’s also not known if she has any siblings.

Gigi is married to Ian Woods, an investment banker. The two met and dated for a long time before he proposed to her and later  got engaged.  Woods proposed to her in a rowboat in the middle of Lake Joseph in the Catskill Mountains with an emerald cut, five-carat total weight engagement ring. “I was so surprised. All I could think was I hope the ring doesn’t fall in the lake,” Stone said.

Woods made it very clear after being proposed to that she wanted a “Jane Austen wedding,” and that’s exactly what she got. She and her husband exchanged their marriage vows in July 16, 2010, in a ceremony at chateau de Raincheval, a recreated version of the 17th century French structure. Gigi wore a beautiful Vera Wang dress .

Stone and her husband has two kids together, a son named Weston Woods and a daughter.

Stone  works as a freelance TV news anchor for national news programs on NBC News and MSNBC and appears as a business expert on various networks. She is the on-air host and co-producer of “Hiring America,” a nationally syndicated career advice TV show. She creates, writes and produces her own programming and has interviewed countless Fortune 500 CEOs, politicians, and celebrities including Donald Trump, Hillary Clinton, Joe Biden, Andrew Cuomo, Ashton Kutcher and Jay-Z. She has covered Presidential elections, the financial crisis and major global and national breaking news stories, as well as red carpet events including the Oscars and NY fashion week.

Stone worked as  a correspondent for ABC News, based in New York and reported for “Good Morning America,” “World News with Charles Gibson” and “Nightline” as well as other ABC platforms. She also anchored for ABC News Now the network’s 24-hour digital channel, and “World News Now,” ABC’s overnight news program.

She has reported live from the scene of numerous domestic and international breaking news events, covering wildfires, floods and murder investigations, anchored coverage of the death of Pope John Paul II and the aftermath of Hurricane Katrina. Additionally, she has done a series of investigative reports on health insurance fraud, pension shortfalls, and predatory lending practices.

From April 2002 to July 2004, Stone reported business news for Business Week TV and NewsOne, ABC News’ affiliate news service. At Business Week TV, she wrote, produced and reported live daily business updates for WABC-TV and “Money Talks,” a national consumer affairs finance program for ABC affiliates. From 1997 to March 2002, she was a general assignment reporter and the Queens bureau chief for NY1 News, where she covered the September 11, 2001 attacks and she was a reporter and anchor at ABC News’ affiliate in Wilmington, NC, WWAY/TV-3.

Stone also serves as the co-host of “Bloomberg Enterprise,” Bloomberg Television’s weekly program profiling the CEOs of fast-growing companies and also  created, co-produced, and hosted the “Inspiring Women in Business” interview series. She has anchored and reported live from the scene of major breaking financial news events. They include Bernie Madoff’s trial, various insider trading cases, corporate mergers and acquisitions.

Prior to being a journalist, Gigi is also an entrepreneur. She has her own consulting company called Stone Woods Media where she “teaches executives and corporate spokespersons how to best communicate their message and connect with an audience. She helps them prepare for media interviews, creating and delivering a compelling story that resonates across various media platforms.”

She has an estimated net worth of $4million.