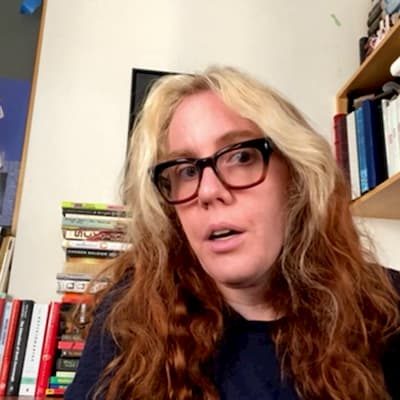 Molly Jong-Fast is an American author and freelance magazine writer. She serves as an editor at large for the Daily Beast, for which she also hosts the podcast ‘The New Abnormal,’ with Rick Wilson.

Molly stands at a height of 5 feet 6 inches tall.

She attended New York University, Barnard College, and Wesleyan University and completed a Master of Fine Arts degree in English at Bennington College.

Jong-Fast is the daughter of Erica Jong and Jonathan Fast. Her father is an assistant professor of social work at the Wurzweiler School of Social Work at Yeshiva University in New York. Her mother is a novelist and poet best known for her 1973 bestseller Fear of Flying, a book that became a touchstone of the sexual liberation movement.

Her parents divorced when she was young and her mother got married to Kenneth David Burrows, a partner in Bender Burrows & Rosenthal, a New York law firm while her father married Rev. Barbara Fast, the associate minister of the Unitarian Church in Westport.

Jong-Fast has written about her parents sex life saying that she “wouldn’t have written about it if it didn’t feel so particularly hilarious, and strange and 1970s-ish.”

Jong is the only child of her parents.

Molly is married to Matthew Greenfield since November 2003. He is a managing partner of Rethink Education, a venture capital firm that invests in education-related businesses with big, high-impact ideas.

He is also an assistant professor of English at the College of Staten Island in Willowbrook. He is also a poet and an editor of ”Edmund Spenser: Essays on Culture and Allegory” (Ashgate Publishing, 2000). He graduated from Yale, from which he also received master’s and Ph.D. degrees in English literature.

She has three children a son known as Max and Twins Darwin and Beatrice.

Molly is an editor at large for the Daily Beast. She is also contributing editor to The Atlantic, The Bulwark, Playboy, and Glamour.

Jong-Fast hosts ‘The New Abnormal’, a Daily Beast podcast, alongside Rick Wilson. It airs on Tuesday and Friday.

Molly revealed that she was a drug addict at a young age at joined Alcoholic Anonymous at the age of 19.

In an article on The Atlantic she wrote; “I joined AA at 19 mostly because I loved cocaine, truly loved cocaine, but also because I loved vodka and cheap white wine and diet pills and valium in enormous quantities. I wanted to not die, so joining was an easy decision, helped along by the knowledge that I came from a family of female alcoholics: My mother had written novels about her drinking, and my grandmother was famous for her drunken vomiting at various fine restaurants throughout Manhattan. So, on November 1, 1997, I boarded a plane for the Hazelden treatment center in Minnesota. Soon after, I began attending AA meetings, which I still attend to this day, though on Zoom right now. AA saved me. I’ve been sober through numerous life experiences—my 21st birthday, the terrorist attacks of 9/11 (I went to a meeting that night), my wedding, the births of my three children, and now months and months and months of a pandemic that may go on for months and months longer.”

According to Glassdoor, the average annual salary of newspaper columnists is about $90,000. This is the figure for average newspaper contributors, but Molly is a prominent writer, so her yearly earnings can possibly be over $200,000 on an average year.

She holds an estimated net worth of $1 million as of December 2020.