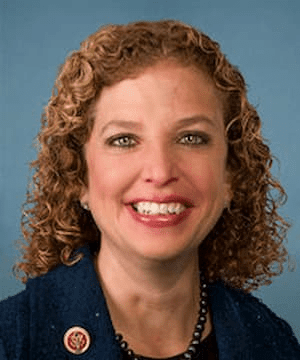 Debbie Wasserman Schultz is an American politician serving as the U.S. Representative from Florida’s 23rd congressional district and first elected to Congress in 2004. She is a member of the Democratic Party and a former Chair of the Democratic National Committee.
She served in the Florida House of Representatives and the Florida Senate and was a national campaign co-chair for Hillary Clinton’s 2008 run for president.
She was elected chair of the Democratic National Committee in May 2011, replacing Tim Kaine. On July 28, 2016, she resigned from her position after WikiLeaks released a collection of stolen emails indicating that Wasserman Schultz and other members of the DNC staff had favored Hillary Clinton over Bernie Sanders in the 2016 Democratic primaries.

She graduated from Half Hollow Hills High School East in 1984. She also received a Bachelor of Arts Degree in 1988 and a Master of Arts Degree with a certificate in political campaigning in 1990, both in political science, from the University of Florida.
At the University of Florida, she was active in student government, serving as president of the Student Senate and the founder and president of the Rawlings Area Council Government. She was also a member of the Omicron Delta Kappa honor society, the James C. Grimm chapter of the National Residence Hall Honorary, and the union Graduate Assistants United. She served as president of the Graduate Student Council and vice president of the UF College Democrats.

She is the daughter of Ann and Larry Wasserman. Her father is a Certified Public Accountant.

She has a brother, Steven Wasserman is an Assistant United States Attorney for the District of Columbia.

She is married to Steve Schultz who is a Broward banker.

In 1988, she became an aide to Peter Deutsch at the beginning of his state legislative career. In 1992, Deutsch successfully ran for United States Representative of Florida’s 20th congressional district, and suggested to Wasserman Schultz that she run for his vacated seat in the Florida House of Representatives. Wasserman Schultz won 53 percent of the vote in a six-way Democratic primary, avoiding a runoff. She also won the general election for this seat. At age 26, she became the youngest female legislator in the state’s history.
She served four terms in the Florida State House of Representatives, for eight years, leaving due to state term limits. She became an adjunct instructor of political science at Broward Community College, as well as a public policy curriculum specialist at Nova Southeastern University.
Based on her political experience, she ran successfully for the Florida State Senate in 2000. She supported several bills, including the Florida Residential Swimming Pool Safety Act and one creating a Children’s Services Council for Broward County. She received an award from the Save The Manatee Club for her commitment as a state senator in the 2002 legislative session to manatee protection.

She was first sworn in to the U.S. House of Representatives in 2005, she previously served in the Florida House of Representatives and Florida Senate where she originally displayed her philosophy that there is “no task too small, and no goal too big.”
Only two months after her arrival in Congress, she became a leading national voice in opposition to President George W. Bush’s involvement in the Terry Schiavo case. Facing a House of Representatives controlled by Republicans, she stood up for civil rights and defended the idea that “Congress is not the appropriate venue to decide end-of-life or any private, personal family dispute.
After announcing her own battle with breast cancer in 2009, she introduced the EARLY Act, a piece of legislation designed to increase breast cancer education and awareness. The EARLY Act became law as part of the Affordable Care Act, signed by President Barack Obama in 2010. She also worked with Republican Congresswoman Renee Elmers to write and pass the PALS Act, which helps increase young women’s access to mammograms.
A leading advocate for women and girls, she introduced the Rape Survivor Child Custody Act to encourage more states to allow women to terminate the parental rights of a rapist, based on clear and convincing evidence. The bill was signed into law by President Obama in 2015.
Currently she serves as a Cardinal on the Appropriations Committee, making history as the first-ever woman to Chair the Military Construction and Veterans Affairs Subcommittee, where she is committed to ensuring our nation’s veterans have the resources and support they need. In addition, she serves on the Homeland Security Subcommittee, as well as the Energy and Water Subcommittee, where she is a leading advocate of the efforts to protect the Florida Everglades, take bold action on climate change, and safeguard our air and water.
In the 116th Congress, Wasserman Schultz also serves on the Committee on Oversight and Reform (COR), which has vast jurisdiction over the government and private sector, and plays a key role in overseeing the Trump Administration.
As Chief Deputy Whip of the Democratic Caucus, she has the unique ability to work with and help lead her colleagues in support of a progressive policy agenda. She has been a tireless defender of Social Security and Medicare and is strongly committed to expanding access to quality and affordable health care, preventing senseless tragedies of gun violence, and defending the fundamental idea that all Americans have the right to be treated equally under the law.

On February 15, 2013, she introduced the Stopping Tax Offenders and Prosecuting Identity Theft Act of 2013 (H.R. 744; 113th Congress) into the House. The bill would increase the penalties on identity thieves in the United States and change the definition of identity theft to include businesses and organizations instead of just individuals.

She opposed a 2014 medical marijuana amendment in Florida that narrowly failed to reach the 60% of votes in favor needed to amend the Constitution of Florida. She angered medical marijuana activists and major Democratic donors over this and her comparisons of medical marijuana dispensaries to “pill mills”, which over-prescribe and over-dispense painkillers to patients with dubious symptoms. After she expressed interest in running for the United States Senate in the 2016 elections, medical marijuana activists vowed to thwart her ambitions. Attorney and donor John Morgan said that her position on medical marijuana “disqualifies her from the [Democratic Senate] nomination.
In response, in February 2015, Wasserman Schultz’s staff emailed Morgan, offering to change her position on medical marijuana if Morgan would stop criticizing her. Morgan declined her offer and released the emails to Politico, calling her a “bully”. She at first declined to comment, then denied that her office had even sent the emails. Morgan responded: “What Debbie leaves out in her pushback was the crystal clear message that her potential support of the new amendment [that has been proposed for the ballot in 2016] was predicated upon me withdrawing my comments to Politico. I don’t know how to view that as anything but an offer of a quid pro quo.”

The chair of the Democratic National Committee, Debbie Wasserman Schultz, announced her resignation on the eve of the party’s convention, dealing a blow to hopes of demonstrating unity in the face of the threat from Donald Trump. She said she would step down after the convention. She has been forced to step aside after a leak of internal DNC emails showed officials actively favoring Hillary Clinton during the presidential primary and plotting against Clinton’s rival, Bernie Sanders.
“Debbie Wasserman Schultz has made the right decision for the future of the Democratic party,” Sanders said in a statement, adding that the party leadership must “always remain impartial in the presidential nominating process, something which did not occur in the 2016 race”.

There is no clear information about her net worth.