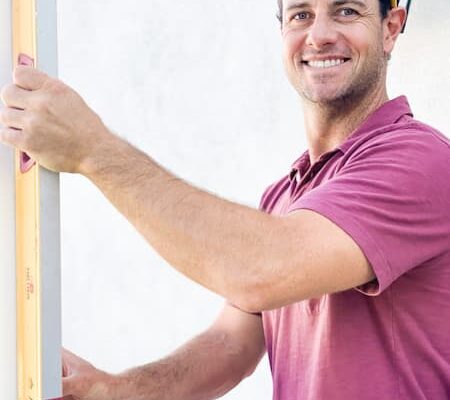 His actual age is unknown but he is estimated to be in his 30’s.

He attended the University of Orimbah in Central Coast, Australia with a Certificate II: Carpentry and Joinery.

Mitch is married to Danielle Glew since July 13, 2008. Danielle is an interior designer who graduated with a B.A. from USC. After graduating she ‘established a partnership with the #1 selling real estate team in the South Bay, growing the Company into a $150MM producing team, ranked as one of the top producing teams in America. While participating in over 1000 real estate transactions in her career, Danielle uncovered her talent for understanding the emotional value and ROI when it comes to making capital improvements to your home.’

Mitch and his wife Danielle have two sons together although their names are unknown.

Glew is a general contractor who began his journey as a builder and craftsman from a very young age. He was born into a family with a successful high-end building and development company just outside of Sydney. He is the co-owner, alongside his wife Danielle, of Glew Build, which is a residential remodeling & building Company in South Bay and greater Los Angeles area.

The company was incepted in 2009 and has since collaborated with many top-level architects and builders in the South Bay and Los Angeles. The couple continue a creative partnership with their counterpart, Glew Build Australia, traveling annually to Australia and the South Pacific to gain inspiration from international design concepts and Australian building materials.

He began his career as a site supervisor at Multiplex in Londin where he organized & oversaw all trades involved in the completion of 5th floor construction from start to finish, including: all toilet blocks, kiosks & concourse area. He later moved to Australia where he joined Construct Central Coast as a site supervisor. They specialized in high-end custom residential remodels and new construction.

In October 2007 he moved to Stockton, California where he joined Lurtsema Real Estate as a general contractor before joining Synthesis Design + Build in Los Angeles as a site foreman. In January 2017 he founded STIX Hyrbid Lifestyle Appar, a men’s golf and surf hybrid apparel line, providing versatile and comfortable style from the course to the coast.

Mitch is the general contractor of HGTV’s ‘Fix My Flip’ alongside host and real estate expert Page Turner. In the show Page helps ‘flippers who are stuck, losing money and in over their heads. In exchange for a partnership and profit-share, she’ll bring her own team, money and tough love to get their wayward flip back on track to make top dollar.’