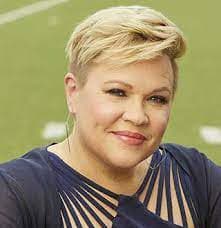 Holly Rowe is an American sportscaster who presently works for ESPN. She is most recognized for his work as a sideline reporter for ESPN’s college football broadcasts.

Rowe attended Brigham Young University after graduating from Woods Cross High School in Woods Cross, Utah in 1984. She worked as a news anchor for BYU’s campus television station, KBYU-TV. Rowe attended BYU for two years but did not complete her education. She also worked as a sportswriter for the Daily Utah Chronicle and the Davis County Clipper during this time. Eventually, she went to school and graduated from the University of Utah with a broadcast journalism degree in 1991. She interned at CBS Sports following college (1991–1992).

Information regarding her parents or their names has not been revealed to the public yet.

She is single. However, it is rumored that she was previously married to the father of his son who is not yet known. However, in a Facebook post on October 23, 2010, her son, McKylin Rowe, gave some insight on his father. This is when he revealed that his father worked at Tailgate Palace as a security guard. Holly disclosed that she had previously broken up with her boyfriend on June 14, 2018. This was due to the fact that he was uninterested in the things she admired.

She is a lovely mother to McKylin Rowe. He is an actor in various TV shows and short films.

Holly was diagnosed with Desmoplastic Melanoma, a type of skin cancer that is extremely rare, in 2015. She is still undergoing therapy and is committed to informing others about the hazards and treatment advances. Rowe has become a tireless advocate for cancer research and prevention while undergoing treatment for Stage IV Metastatic Melanoma.

On October 22, 2021, Rowe made Utah Jazz history as the team’s first female color commentator in a game against the Sacramento Kings. Rowe attended the University of Utah. In September 2021, she joined Utah Jazz’s game night broadcast team. She has joined the Jazz talent lineup as an analyst for the 2021-22 season, the franchise announced on Friday.

Rowe works as a reporter for ABC Saturday Night Football, Big Monday men’s college sports, Women’s Final Four, Women’s College World Series. She has also broadcasted at  NCAA indoor and beach volleyball national finals, and the WNBA, among other high-profile events and programming.  After appearing on select ESPN telecasts in 1997 and ABC Sports in 1995-96, Rowe joined the network full-time in August 1998. Holly also reported for ESPN on soccer, swimming, track and field, and the Little League World Series of baseball and softball.

She presented ESPN’s coverage of the Running of the Bulls and was one of four play-by-play announcers on ESPN’s coverage of the 1998 Women’s World Cup. She was also the analyst for the Utah Starzz of the WNBA until they relocated to San Antonio. From 1993 through 2009, Rowe was the play-by-play voice for BYU women’s basketball, volleyball, and gymnastics, as well as a sideline reporter for the Blue and White Sports Network for BYU and Air Force football.

She has garnered a networth estimated at $ 3 million.