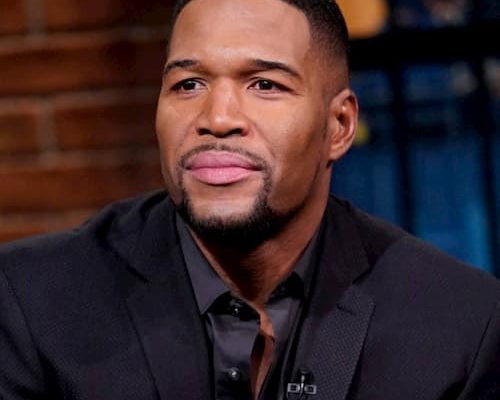 Michael Strahan is an American television personality and former professional football player with the New York Giants of the National Football League (NFL).  After retiring from the NFL, he became a media personality.

He was elected to the Pro Football Hall of Fame in 2014.
He is a football analyst on Fox NFL Sunday, and co-host of ABC’s Good Morning America and its spinoff Strahan, Sara and Keke. He also co-hosted the syndicated daytime talk show, ‘ Live with Kelly and Michael,’ with Kelly Ripa from 2012 to 2016.

In 2014, he became a regular contributor on Good Morning America, and in 2016 the network announced that he would be leaving Live! to join GMA full-time.

He graduated from Westbury High School and Texas Southern University.

Strahan started playing high school football at Westbury High School in his senior year. He played organized football at Mannheim American High School (MAHS), a US Department of Defense Dependent High School, in Käfertal (Mannheim), playing linebacker for the Mannheim Bison in 1985.
He earned  a scholarship  from Texas Southern University.

He then flew back to Germany for the spring term, where he graduated from Mannheim Christian.

He is the son of Louise (Traylor) Strahan, a basketball coach, and Gene Willie Strahan, a retired Army Major and a boxer with a 1–1 record against future heavyweight Ken Norton.

He has five siblings and he is the youngest. He is also the nephew of retired professional football player Arthur Strahan.

He was married to his first wife, Wanda Hutchins, from 1992 to 1996. Wanda Hutchins is an established decorator and interior designer, currently in charge of Wanda Home Designs, a company that deals in creating décor pieces and furniture and repurposing existing ones. Strahan moved them to the U.S. and purchased a $163,000 house in the same Houston neighborhood where his parents live.
In 1999, he married Jean Muggli after meeting her at a spa. Strahan and Muggli finalized their acrimonious divorce where he accused her of abusing their teenage daughters on July 20, 2006.

In January 2007 Judge James B. Convery awarded Muggli $15 million in a divorce settlement in addition to $18,000 monthly child support. Strahan appealed. In March 2007, the court ordered the Montclair, New Jersey, mansion to be auctioned and the sales money split evenly; the house was valued at $3.6 million.
In August 2009, Strahan became engaged to Nicole Mitchell, Eddie Murphy’s ex-wife, but the two ended their engagement in 2014.

Strahan and his first wife Wanda Hutchins have a daughter, Tanita Strahan, and a son, Michael Anthony Strahan, Jr. He also has twin daughters, Isabella and Sophia, born in December 2004 with his other wife Jean Muggli.

On June 24, 2008, he joined the Fox NFL Sunday pregame show, alongside host Curt Menefee and analysts Terry Bradshaw, Howie Long, and Jimmy Johnson.
When Fox acquired the rights to broadcast Thursday Night Football in 2018, it was decided to have him host the Fox NFL Thursday pregame show, along with Bradshaw and Long. Fox NFL Thursday is televised live from New York City instead of from the Fox NFL Sunday studios in Los Angeles so it can accommodate Strahan’s other live shows.

He is co-anchor of ABC’s “Good Morning America” and host of ABC’s primetime show “$100,000 Pyramid.”
From 2012-2016, he co-hosted the top-rated, nationally syndicated entertainment talk show “LIVE with Kelly and Michael.” Strahan and co-host Kelly Ripa were the co-winners of the 2015 and 2016 Daytime Emmy for “Outstanding Entertainment Talk Show Host.”
He founded his own production company SMAC Entertainment which creates strong and diversified content for ABC and other networks, most notably “The Joker’s Wild,” “ESPN 30 for 30: Deion’s Double Play,” “Wiz Khalifa: Behind The Cam,” “Back In The Game,” and more. In November 2020, Strahan and SMAC Entertainment produced a new HBO Sports documentary, “The Cost of Winning.” The four-part docuseries follows the football team at St. Frances Academy in Baltimore, Maryland.

In 2015, he released his best-selling book, “Wake Up Happy: The Dream Big, Win Big Guide to Transforming Your Life.”

In 2002, he had a multimillion-dollar restoration and renovation done on Georgian Heights, a home built in 1906 at 99 Lloyd Avenue, Montclair, New Jersey, a red brick house with a carriage house and greenhouse that he bought in 2000 for $1.3 million. Before moving in, he allowed the Junior League of Montclair-Newark to use his house as a model home for its charity fundraiser.

From May 28 to 31, the League decorated the mansion, had a “bare bones” party and a black-tie affair, and held $25 tours to fund the Junior League programs, Children At Risk and HomeCorp. Children At Risk aids children and families and HomeCorp helps low-income people achieve home ownership.

“Basically, we’re redoing our house to let strangers walk through it for a month,” Strahan said. “It’s a month-long fundraiser. They’ll come in and decorate, paint the walls. They’ll hang the curtains, bring in furniture, light fixtures. None of it will be ours. When they’re done, if we want something, we get it at a cost.”

In February 2008, Strahan and Giants teammate Justin Tuck teamed up with Nike to design their own exclusive sneakers for ID studio in New York City. All proceeds from the sneakers were donated to Nike’s Let Me Play global campaign.

In December 2018, he volunteered at St. Jude Children’s Research Hospital and was featured in a series of holiday promotions

His estimated salary is $17 million per year.

His approximated net worth is $65 million.