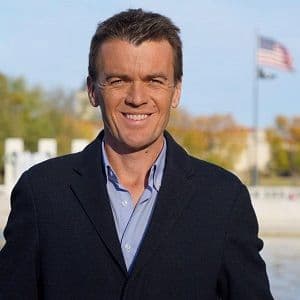 Michael Rowland is an Australian media personality serving as a co-presenter of ABC News Breakfast on ABC-TV alongside Lisa Millar. He is an experienced political reporter having worked in the federal, Victorian and NSW press galleries and also a business and finance reporter.

He graduated from the University of Technology in Sydney with a bachelor’s degree in Communication.

Michael is the eldest of five children. His father was a public servant in one of the NSW electricity authorities before they were all privatized while his mother was a homemaker.

Rowland married his wife Nicole Webber on 20th April 2002. The couple first met as political journalists covering parliament. At the time Michael was a radio reporter for ABC and Nicki was the state politics reporter for the Herald-Sun.

“I’d see him at door stops and outside Parliament House. He was very handsome and a bit aloof. He didn’t speak a lot but he’d ask a question of a politician and I thought, ‘oh, there’s a bit going on in there’. I didn’t ever expect that he would look at me.” Nicki said.

Who is Nicole Webber

Nicole Webber is also a journalist who began her career as a journalist for Western District Newspapers. She has also worked for Bendigo Advertiser, Yorkshire Post as a sub-editor, Melbourne Times as a Freelance property reporter and later joined Geelong Advertiser as a business editor and general news reporter.

She joined Herald Sun in June 1995 where she served as a business affairs reporter, education reporter, state politics reporter, and Sydney correspondent until June 2005. She returned to Herald Sun in June 2010 as a confidential reporter and was later promoted to property editor, a position she served until she left in January 2013 to join News Limited as a Victorian Real Estate Editor.

She currently works as a senior consultant for Truth Agency. Prior to joining Truth Agency, she worked at the University of Melbourne first as a media advisor then as a chancellery senior media advisor before she was promoted to media manager.

Michael and his wife have two children together; a son known as Tom Rolland and a daughter known as Eleanor Rolland. During an interview, Michael said they were told Eleanor had cancer when she was 18 months but fortunately she didn’t. Tom on the other hand had food allergies and nearly died at four months. He was also diagnosed as legally blind in one eye at the age of five but it later turned out to be a type of amblyopia – also called lazy eye – and was fixable with special glasses that Tom had to wear for a long while. The eye has since corrected itself.

Rowland is co-presenter of ABC News Breakfast on ABCTV and ABCNews24 alongside Lisa Millar. He is a former ABC Washington correspondent, covering stories ranging from the 2008 presidential election to the eruption of the global financial crisis. He has also reported from Indonesia, Cuba, Turkey and India. Michael spent five years covering federal politics and was the ABC’s Victorian political correspondent during the Kennett and Bracks years. He also has extensive experience covering business and economics. Michael is a former President of the Melbourne Press Club.

He joined Australian Broadcasting Corporation in February 1987 as a news cadet. He worked as a in the Canberra Press gallery for five years covering both New South Wales and Victorian politics. In 1988 he became an NSW state political reporter. He was then promoted to a finance reporter in 1991

From 1993 to 1998 he joined ABC Radio News as a co-host on the financial news and provided a segment during the current affairs news segment reporting on financial and economic changes and its state within Australia and Wall street in America. He still visits occasionally to present and co-host, reporting on Australian affairs including economic and political news.

In 1998 he was promoted to Victorian State political reporter. In 2001 he joined became the business and finance reporter for AM, an informative morning current affairs program, The World Today, a current affairs program, PM, the midday report run by the ABC, Inside Business, the economic and financial focused branch of ABC and the 7 pm TV news broadcast across Australia. He served as an economic correspondent on Lateline from late 2004 to 2005.

From June 2005 to July 2009 he was the ABC’s correspondent in Washington. During his tenure, he reported the US presidential election and was ABC’s Wall Street correspondent during the height of the global financial crisis. He reappeared in this role for the United States presidential election 2020 covering it live during the coronavirus outbreak.

He joined ABC News Breakfast in June 2010 as a co-presenter alongside Virginia Troili. In June 2019 Virginia left News Breakfast to join ABC Radio Melbourne as Mornings presenter. She was replaced by Lisa Millar.

Michael’s right eye has a dilated pupil which he said is a result of trauma that occurred in January 1988 during a contest with a slingshot pellet.

“My mate Patrick and I were driving through Annandale in Sydney’s inner west in my burnt orange VW Golf. Thankfully, he was driving at the time. Otherwise, the consequences could have been much worse.

The car windows were down, and we were chatting away when I suddenly felt a blow to my right eye. At first it didn’t hurt. There was just a general numbness. Then came the excruciating pain, and the eye started filling with blood. It later turned out someone was firing slingshot pellets at cars that night, and I just happened to cop a bullseye.”

He underwent emergency surgery at Sydney Eye Hospital in Woolloomooloo and a team of ophthalmologists managed to save his eye but the pupil would stay forever dilated.He also revealed that he is color blind so his eye can’t take a trick.

He prefers to keep his private life hidden from the public. Nevertheless, in 2013, a report from ABC was leaked, revealing their annual compensation.