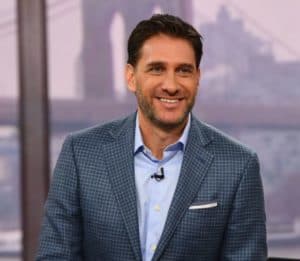 Michael Greenberg is an American television anchor, talk show host, and novelist who works for ESPN and ABC. Mike is the new host of NBA Countdown. He is also the host of  Greeny since August 2020.

In 1985, he graduated from Stuyvesant High School. Greenberg graduated from Northwestern University in 1989, where he was a member of the Theta Chi Fraternity, and began working at WMAQ-AM in Chicago as a sports anchor and reporter.

He stands at a height of 5 Feet 11 inches tall.

He is the beloved son of Arnold Greenberg(father) and Harriet Greenberg(mother).

He is a brother to Douglas Greenberg.

He has been married since 1997 to his lovely wife Stacy Steponate Greenberg.

He is a devoted father of two, Nicole Greenberg and Stephen Greenberg.

Greenberg joined ESPN as an anchor for the launch of ESPNEWS in September 1996. He went on to headline SportsCenter for a long time after Mike & Mike debuted on January 3, 2000. Greenberg and Golic were honored in the Broadcasting Hall of Fame of the National Association of Broadcasters in 2016. In addition to that, Greenberg was also inducted into the Medill Hall of Fame at Northwestern University. He presented Duel on ABC’s sister network from 2007 to 2008, and he co-hosted Battle of the Network Stars with Joe Tessitore. Since its debut in 2018, Mike Greenberg has presented ESPN’s morning show Get Up.

Additionally, he was selected host of NBA Countdown, ESPN, and ABC’s long-running NBA pregame show, in October 2021. In August 2020, he made his widely anticipated comeback to ESPN Radio as the host of Greeny. The show airs from noon to 2 p.m. ET and is streamed on ESPN+. He joined ESPN+ in September 2020 as the host of Bettor Days with Mike Greenberg.

Along with that, Greenberg formerly worked as a sports anchor/reporter for the regional cable news network CLTV in Chicago and as a reporter for SportsChannel Chicago. Michael had also worked for WSCR-Radio in Chicago as a reporter covering events such as the World Series and Super Bowl, as well as a talk show presenter. He was also a sports anchor/reporter for Chicago’s WMAQ-Radio and a national sports columnist for the California-based Copley News Service, publishing a weekly piece in the mid-1990s.

Moreover, after a family friend, Heidi Armitage, was diagnosed with breast cancer in 2013, Greenberg released his first novel, All You Could Ask For, as a tribute. Greenberg and his wife Stacy gave 100% of the earnings from the novel to the V Foundation for Cancer Research, and the work was a New York Times Best Seller. My Father’s Wives was Greenberg’s second novel, released in 2015.

He conducts the podcast dubbed Greeny on  ESPN Radio. He keeps his listeners up to date on the never-ending breaking news in the sports world that matters to them. He is joined on a regular basis by the game’s finest names, who cover all aspects of sports. This is where the show’s hourly podcasts can be found.