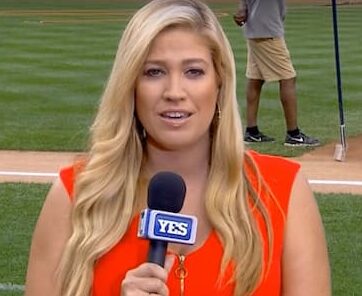 She was born on July 22, 1983 in Walnutport, Pennsylvania, United States.

She attended Allentown (Pa.) Central Catholic High School for her high school education and in December 2013 they inducted her into Rockne Wall of Fame, for her athletic exploits. In 2005 she graduated from La Salle University in Philadelphia with a degree in Communications. She played volleyball while in college.

She is the daughter of Dan and Sara Marakovits. Her father is a former baseball player. She was brought up alongside her two brothers, Justin and Danny.

She keeps that part of her life very private, her narital status or sexual orientation is unknown.

Meredith is a New York Yankees clubhouse reporter for YES Network since March 2012. She reports on the team within the network’s Yankees game telecasts, pre- and postgame shows, Yankees Batting Practice Today and Yankees Hot Stove.

She also appears on YES’ special Yankees programming, contributes to YESNetwork.com and as a fill-in YES’ Brooklyn Nets reporter and pre- and post-game show host. In addition, she frequently appears as a guest on MLB Network shows such as The Rundown and MLB Now.

During her tenure at YES she has won five New York Emmy Awards while covering the Yankees and was named to the “Top Women in Sports” list by the trade organization Cynopsis in 2019.

Earlier in her career she worked at Lehigh Valley Ironpigs Television Network in Allentown, Pennsylvania; the IronPigs are the Phillies’ Triple-A affiliate as the pre- and post-game host and field reporter. She also covered the Reading Phillies (Double-A affiliate). She also worke as a sideline reporter for college football, basketball and indoor football broadcasts for Service Electric 2’s sports division.

She has an estimated networth of $2 million.

Her Cameo link is www.cameo.com/m_marakovits/booklive.