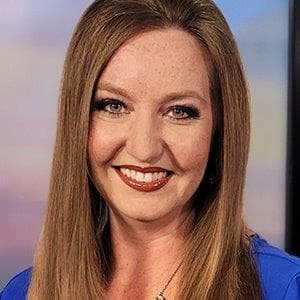 Meggan Gray is an American media personality serving as co-anchor of News 25 Today and also anchors the noon newscast on WXXV-TV, NBC. She previously served as co-anchor for Good Morning Mississippi on WLOX News.

Meggan is the daughter of Lamar and Susan Gray. Her parents are part of the South Mississippi community and have owned and operated their own business in Gulfport for more than 30 years. She has a sister known as Kristen and also lives in Gulfport.

She is married to John Stolarski, her college sweetheart, and works as a principal architect with Allred Stolarski Architectural Group in Ocean Springs.

Together with her husband, they have three children; Austin, Avery, and Aiden.

Meggan is a news anchor who worked for WLOX for 18 years. She joined WLOX in 2003, after graduating from Auburn University, as a morning tape editor. She soon started producing. In the summer of 2005 she began doing shots for Good Morning Mississippi and in the Fall of 2006 she became a full-time reporter. In January 2007 she became a co-anchor for Good Morning Mississippi.

She left WLOX News in October 2021 after she was fired for not taking coronavirus vaccination which was a mandate by GrayTelevision, the parent company of WLOX. During her tenure, she earned Edward R. Murrow and Peabody awards for her work helping produce continuous coverage during Hurricane Katrina in 2005.

Apart from being a journalist, she loves musical theatre. She has performed in many local theater productions. In 2008 she was Maria in KNS’ “The Sound of Music”

Meggan joined WXXV-TV in October 2021 as a co-anchor of “News 25 Today”, a morning broadcast for the FOX and NBC affiliate and also anchors the noon newscast on WXXV-TV, NBC.

Meggan was fired from WLOX News after she refused to take the coronavirus vaccine. On October 1, 2021 she signed off the morning news with a cryptic message where she said she “wanted to just take a little moment and let you know that I honestly do not know what the future holds for me as far as my career here.”

The following day she took to her Facebook page to explain why she lost her job. She said the parent company of WLOX, Gray Television, implemented a policy that all employees, managers, guests, outside contractors and tenants must be fully vaccinated against COVID-19. She was however not vaccinated and had made the decision of not getting the vaccine because she had already survived a case of COVID-19 and there were other ‘more powerful reasons’ that led to her personal decision.

Her decision coasted her job as she decided to preserve her integrity. She added that she tried to keep her job by offering to be tested on a weekly basis but her requests were denied.