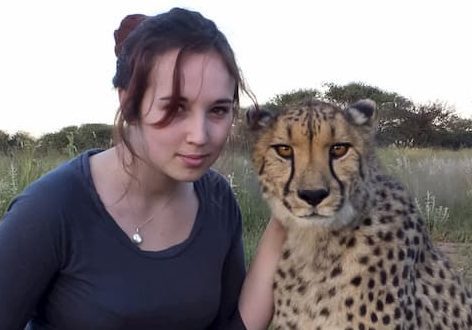 Megan McCubbin is a British zoologist, wildlife TV presenter and conservationist. She is a co-founder of Wildlife Rebellion and the self-isolating bird club.

She holds a Bachelor’s degree in Zoology from the University of Liverpool and specialised in primate behaviour and conservation. She also has a foundation degree in Biological Sciences, General from the same institution.

Megan is the daughter of Charlotte Corney, her biological father is unknown but she is the step-daughter of Chris Pacjham.

Charlotte Corney is a British animal activist and the owner of the Isle of Wight Zoo. Her father bought Sandown Zoo in 1976, the same year Charlotte was born. Charlotte therefore grew up with wild animals walking around the house. Her original intention was to study animal behaviour but she gave up her postsecondary education to help out at the zoo.

She took over the zoo in 2003 after her dad passed away. She helped to promote the zoo through a series called Tiger Island which was featured on the National Geographic channel. She officially inherited the zoo in 2013 when her mom retired as the owner.

Megan’s biological father is unknown but her mother has been in a relationship with Chris Packham for over a decade.

Meghan is the step-daughter of Chris Packham, an English English naturalist, nature photographer, television presenter and author. He is best known for CBBC children’s nature series The Really Wild Show from 1986 to 1995. He also presents BBC nature series Springwatch. He was diagnosed with Asperger syndrome in 2005.

He first met Megan’s mother, Charlotte when he visited a zoo that she run on the Isle of Wight. At the time Charlotte was in a relationship with Megan’s biological father. In 2007 he did a voiceover on a programme that was filmed at the zoo. Charlotte said in an interview that due to his Asperger’s he can’t flirt so she never picked on the usual signs. A few days later they were supposed to go out for dinner but they just talked “the whole night, and we connected on every level. I knew that my whole world was in that person.”

Megan co-presented alongside Chris Packham in a national bioblitz campaign and traveled to 50 conservation sites in 10 days to assess the state of the UK countryside.

During an interview, she said she met her step-dad when she was 2 years old and his passion for the natural world rubbed on her.

“I met my step-dad Chris Packham when I was 2 years old and his passion for the natural world was so infectious that it didn’t take long for it to spread to me! I was very fortunate to have travelled around the world with him as he was filming and leading tours, so I was able to learn a lot about wildlife and the TV industry. I began volunteering at wildlife hospitals and conservation organisations both in the UK and further afield to gain hands-on experience before studying Zoology at the University of Liverpool and the rest is history! I was hooked from the get go.”

Megan is a zoologist whose interest stems from a childhood growing up in and around the Isle of Wight Zoo, which specialises in the rescue and rehabilitation of ex-circus and pet trade animals.

She worked in China as a behavioural specialist for the charity, Animals Asia, which rescues and rehabilitates bears trapped in the bear bile farming market. She analysed the behaviours of animals recently rescued from dire conditions and aided in their transition to life in a sanctuary.

She was a wildlife researcher and presenter for Lush Digital focusing on investigative filmmaking to expose environmental issues and illegal wildlife persecution. Prior to that she presented Undercover Tourist: Inside the Illegal Bear Bile Market for BBC3.

She also reported for Al Jazeera on plastic pollution and the social movement Extinction Rebellion for the award-winning environmental series Earthrise.

Today I’m debating why we need diverse voices heard in the climate movement on the #NatureDebate2019. Before I head to the venue though I went to meet two incredible men outside the @uklabour HQ. With anger and sadness in his eyes, he tells me about his granddaughter. He say “she just loves playing piano and I want her to be able to continue playing piano until she’s my age. But in reality, she may not be able to due to the impacts of climate change. Her home could be underwater and she may well struggle to find enough food – how is that fair?”. These two men are on day 16 (!!) of a hunger strike which will continue until the election. It was so humbling to meet them and hear their stories. @extinctionrebellion @xrebellionuk @thegreenparty @conservatives @libdems #hungerstrike #strikeforclimage #hunger #extinctionrebellion #generalelections2019 #ge2019 #labour #conservative #libdems #greenpartyofcanada #climatechange #diversitymatters